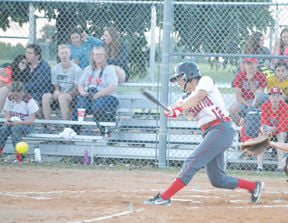 Mckenzie Snook bats in the bottom of the first inning against Eddyville-Blakesburg-Fremont at Chariton June 22. Snook went 1-2 with a run scored. (Bill Howes photo) 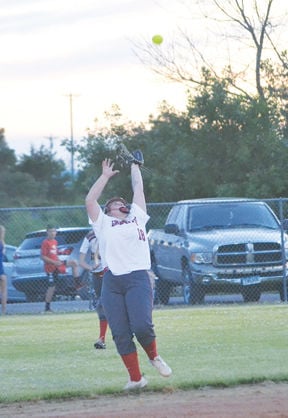 Mckenzie Snook bats in the bottom of the first inning against Eddyville-Blakesburg-Fremont at Chariton June 22. Snook went 1-2 with a run scored. (Bill Howes photo)

The Chariton Varsity softball team hung tough with Eddyville-Blakesburg-Fremont before falling 8-2 to the Lady Rockets at Savage Field June 22.

In the top of the first, the Rockets had bases loaded with one out, but Chariton’s defense and pitcher Layne Braby gave up only one run to get out of the inning down only 1-0. EBF added three more runs in the top of the second to go up 4-0.

Chariton got on the board with two runs in the bottom of the third. Braby singled to score a run and left fielder Savannah Williams grounded out to score another run to make the score 4-2 EBF.

The Lady Rockets scored once more in the fourth to make it 5-2 and they added one more run in the sixth and two in the seventh to go up 8-2 and held on for the win.

“Despite the loss, we are still getting better everyday!” Chariton Head Coach Deb Seuferer said.

'What do we know today?': Big Ten doctors keep eyes on protecting athletes amid COVID-19 pandemic

Braby went the distance on the mound and took the loss. In seven innings she gave up eight runs, seven earned, on 12 hits while striking out two and walking two. Chariton’s defense committed four errors.

At the plate Chariton had four singles, two walks and only five strikeouts. They also had two sacrifice bunts and two stolen bases.

Read the June 30, 2020 edition of the Chariton Leader/Herald-Patriot for the rest of the story.