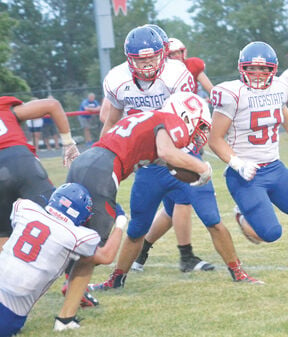 Sam Primakov (#23) fights for a three-yard gain against Interstate 35 during the first quarter of Friday’s game. Primakov rushed for 55 yards on 19 carries. (Bill Howes photos) 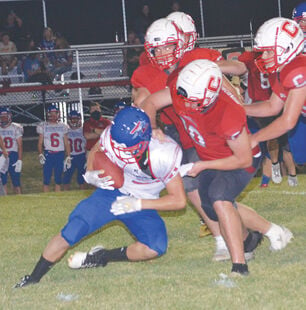 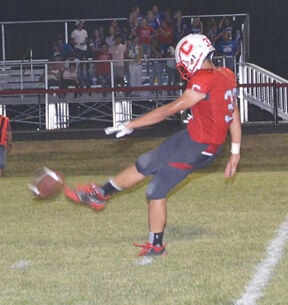 Sam Primakov (#23) fights for a three-yard gain against Interstate 35 during the first quarter of Friday’s game. Primakov rushed for 55 yards on 19 carries. (Bill Howes photos)

The Chariton Varsity football team began the season with a tough 39-0 loss to a very good Interstate 35 team in their season opener at Reynolds Field in Chariton on Friday night.

Interstate 35 dominated a young, inexperienced Charger team up front, rushing for a total of 375 yards on the night. I-35 junior running back Logan Cassady was too fast and tough to stop rushing for 220 yards and three touchdowns including scoring runs of 85 and 64 yards in the second quarter.

On the positive side, Chariton committed just two penalties all night for 10 yards, which is good for a young team. Jayden Allen-Winston also blocked two extra points by I-35 and he also did a good job of punting averaging 34.5 yards on four punts. Alex Bates also had an interception for Chariton.

When Allen-Winston punted, he was able to keep the ball away from the speedy Cassady, which is what Chariton wanted to do.

“We knew they were really good up front. They had four returning offensive linemen along with a really good running back in Cassady. They controlled the line on both sides of the ball. As we played we got better throughout the game. This was kind of what we expected. Their offensive lineman, #53 Caleb Hobart, a senior. is probably the best lineman we’ll see all year,” Chariton Head Coach Curt Smyser said.

With 'heavy legs' but 'a lot of confidence,' FC Tucson heads to Texas for a key match

Coach Smyser talked about the positive things his team did. “We were in the right places at different times defensively, we just have to wrap up and make some plays. We also have to take care of the ball offensively. We have to continue to keep working to get better up front and at catching the ball. We had a couple of good drives offensively. Ryder McGee played real good defense and he played well offensively too. Alex Bates played well on both sides of the ball,” Coach Smyser said.

Chariton received the opening kickoff and fumbled, which I-35 recovered at the Charger 32 yard line. I-35’s Cassady ran down the left sideline for an apparent 32-yard touchdown, but it was called back due to holding, which gave the Roadrunners a first and 13 at the Charger 35.

After a one-yard gain by Cassady, I-35’s Bedwell dropped back to pass but his pass was intercepted by Bates, which halted the possible scoring threat and kept the score 0-0.

A little later in the first quarter I-35 took over at their own 19 following a Charger punt. Cassady took off downfield for a 29-yard gain to the Roadrunner 48.

With I-35 facing a fourth and one at the Charger 43 with 6:28 left in the first quarter, Bedwell raced downfield to the Charger eight-yard line to set up first and goal.

A seven-yard gain by Cassady moved the ball down to the one. The very next play Cassady ran it in for the game’s first touchdown. Cristian Roquet’s extra point was good to make it 7-0 I-35 with 4:56 left in the first quarter.

Read the September 1, 2020 edition of the Chariton Leader/Herald-Patriot for the rest of the story.