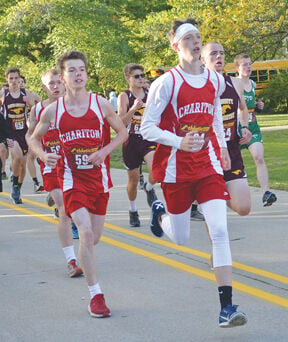 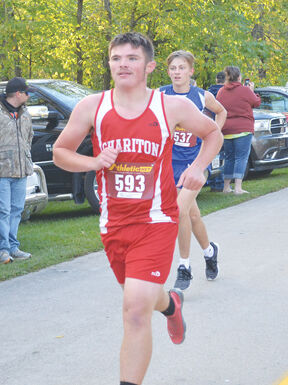 Max Aulwes runs early in the Varsity boys race at the Charger Invite.

Max Aulwes runs early in the Varsity boys race at the Charger Invite.

The Chariton boys cross country team ran very well at the Charger Invite cross country meet at Red Haw State Park in Chariton this past Thursday night. Chariton placed third overall as a team with 133 points and they had four runners place in the top 30 overall.

So far so good: Broncos have no positive COVID-19 tests, dominate Utah State 42-13 in delayed opener

Davis County won the overall Varsity boys team standings with 31 points. Albia was second with 64 and Chariton was third with 133. Cardinal of Eldon was fourth with 147 and Wayne was fifth with 148. Grandview Christian was sixth with 149.

Clarke was seventh with 53 points. Southeast Warren was eighth with 182 and Pleasantville was ninth with 193. Moravia was 10th with 249. Moulton-Udell, Melcher-Dallas and Martensdale St. Mary’s didn’t have enough runners to register a team score.

“It was a beautiful night for a cross country meet. The guys ran really well I thought. Blane continues to put himself in the upper part of each race, which is encouraging to see. I thought that Bradley Ran extremely well walking away with a new %K personal record,” Chariton Boys Head Coach Eli Horton said.

Read the October 6, 2020 edition of the Chariton Leader/Herald-Patriot for the rest of the story.