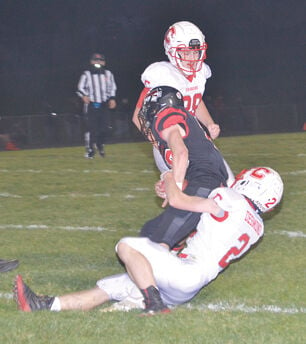 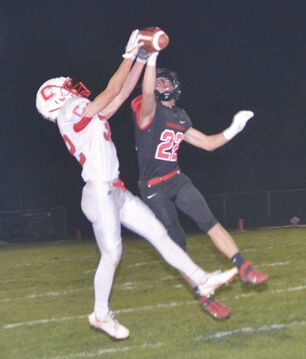 Chariton’s Alex Bates (left) goes up high for a pass along with Centerville’s Caden Sales in the second quarter. The pass was incomplete. (Bill Howes photo)

Chariton’s Alex Bates (left) goes up high for a pass along with Centerville’s Caden Sales in the second quarter. The pass was incomplete. (Bill Howes photo)

The Chariton Varsity football team’s season came to a close with a 54-14 loss to Centerville in the first round of the Class 2A District playoffs at Centerville this past Friday night.

The loss gave the Chargers a final season record of 0-8. With the win, Centerville (5-3) advanced to play West Marshall in the second round at State Center this Friday night.

Chariton came out strong and hung with Centerville for awhile and cut the Big Reds’ lead to 14-7 on a 10-yard pass from Mason Smith to Ryder McGee at the start of the second quarter.

However, the Chargers had two costly interceptions in the second quarter that Centerville converted into scores to take a 27-7 lead into halftime. Centerville had a big third quarter offensively scoring 27 points to extend their lead 54-7 heading into the final period.

“I thought we played a really good first quarter and a half. We tried some trick plays early and had some success and moved the ball a little bit. Our defense played good. Offensively, we weren’t good enough up front to move the ball consistently. The interceptions we had came mainly from trying to stretch the ball and throw it downfield, which isn’t really our strength. The fumbles we had just killed us. We have to hold on to the ball better,” Chariton Head Coach Curt Smyser said.

Centerville was tough to stop offensively as the game went on. Their quarterback combination of Johnson and Sawyer Wardlow was again very effective on the ground and through the air. Senior linebacker Lucas Henderson had a great game for the Big Reds defensively.

One positive for Chariton is that they didn’t have any penalties. Centerville had five penalties for 45 yards. Chariton’s offensive line also only allowed one sack on the night.

At quarterback, Smith went 5-20 for 66 yards with one touchdown and three interceptions. McGee caught two passes for 24 yards and a touchdown. Sam Primakov led Chariton in rushing with 15 yards on 12 carries. Jayden Allen-Winston rushed for nine yards on seven carries and one touchdown.

Read the October 20, 2020 edition of the Chariton Leader/Herald-Patriot for the rest of the story.