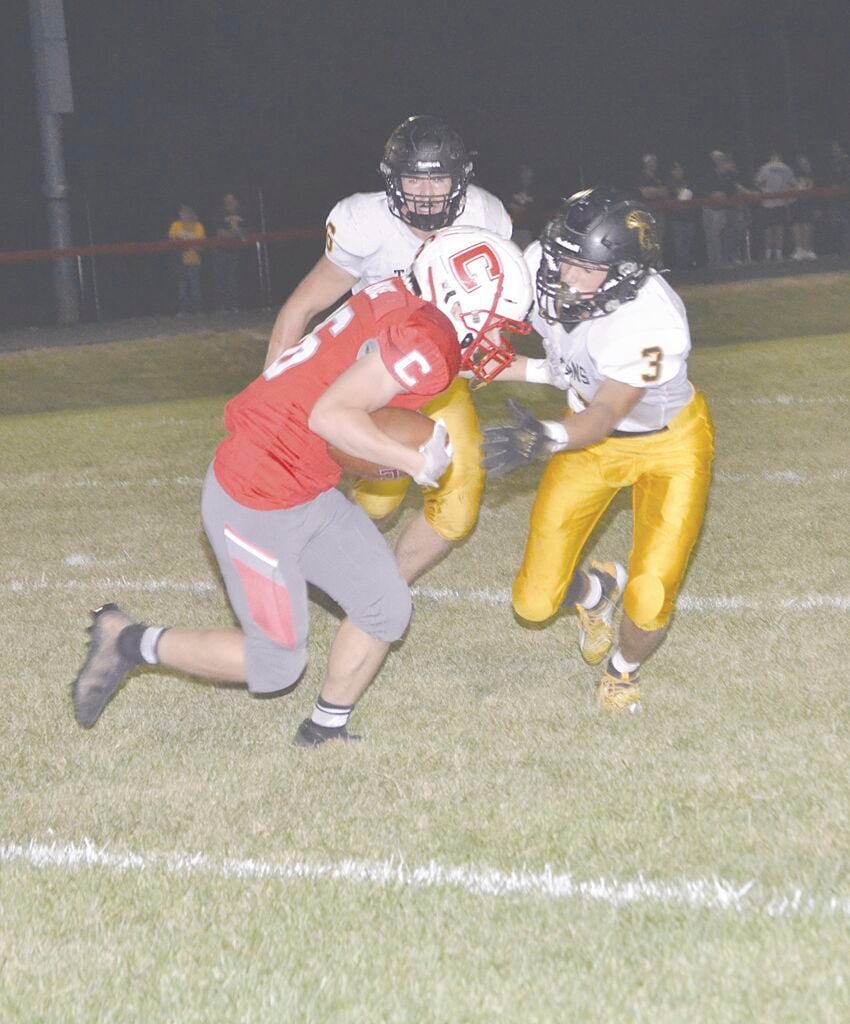 Chariton’s Kasyn Paige (#26) tries to run upfield after catching a short pass during the first quarter. 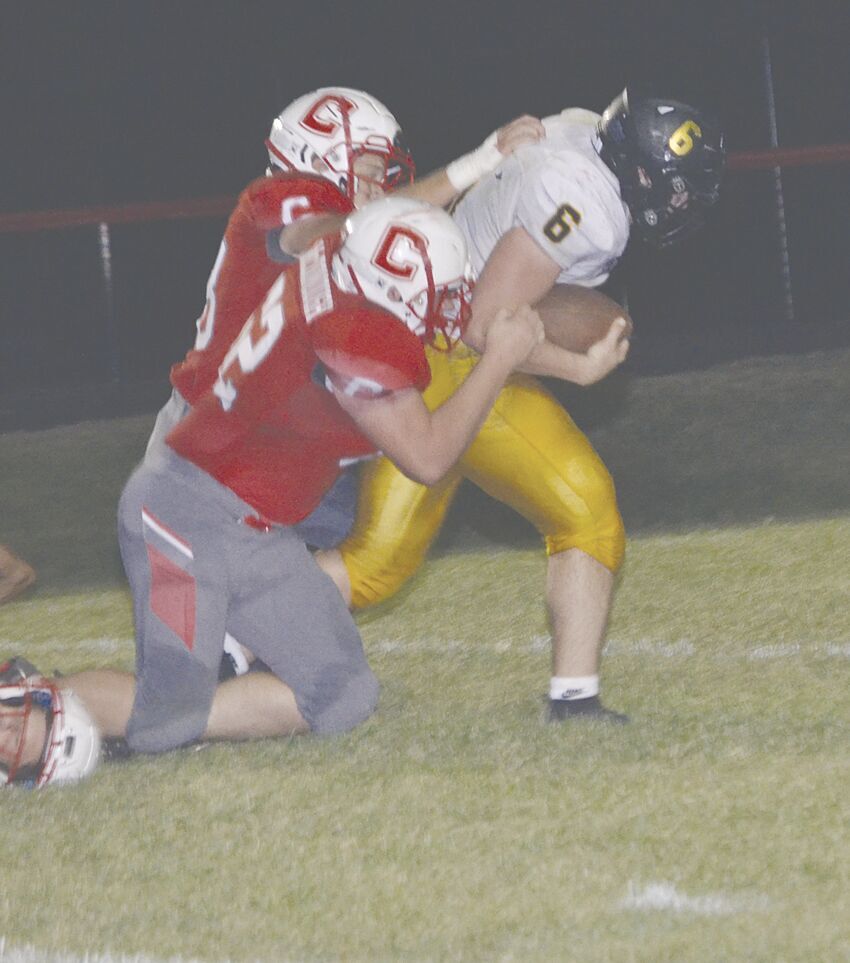 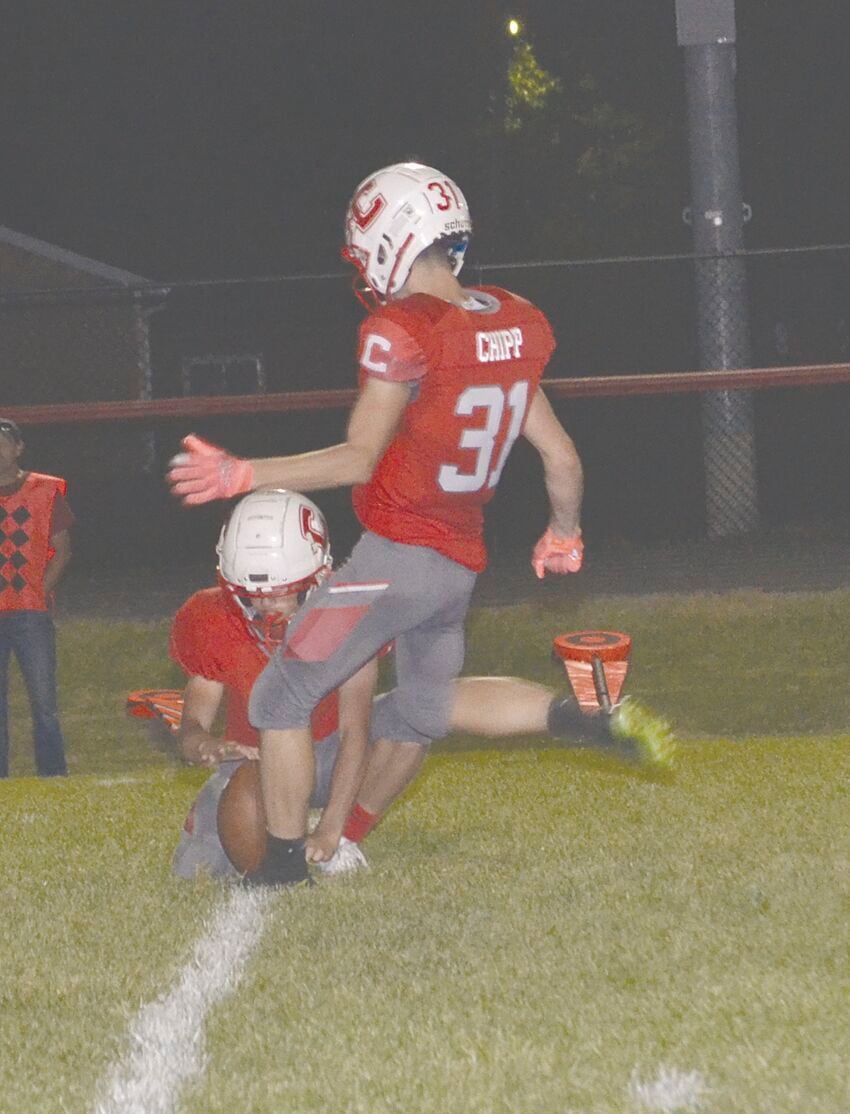 Chariton’s Kasyn Paige (#26) tries to run upfield after catching a short pass during the first quarter.

The Chariton Varsity football team gave a valiant defensive effort but came up a little short in a 36-7 loss against a powerful West Marshall team in their Class 2A District opener at Chariton’s homecoming on Friday night.

West Marshall scored a couple of first quarter touchdowns to take an early 14-0 lead, but the Charger defense held the Trojans scoreless in the second period to keep the score 14-0 at halftime.

On Chariton’s opening second half drive, Chariton had a costly turnover as quarterback Mason Smith threw an interception that was returned for a touchdown, or a “pick six.” The Trojans scored the two-point conversion to make it 22-0 at that point and harder for the Chargers to make a comeback after that.

“I thought our defense played really well for three quarters tonight. We made it hard on our defense because offensively we couldn’t move the ball. They just stuffed us up front. West Marshall’s team speed really killed us. They’re really fast. We knew it was going to be tough coming in. They were ranked anywhere from #7-10 in Class 2A coming into the game and are now ranked #4 or 5. They were just better than us,” Chariton Head Coach Curt Smyser said.

“The pick six we threw at the start of the second half wasn’t all on Mason. The receiver ran the wrong route. Their running back, #6 Preston Pope, is probably the best running back we’ll face all year. He just runs the ball really hard and he’s tough,” Coach Smyser said.

Pope rushed for 262 yards on 30 carries, an 8.7 yards per carry average, and three touchdowns. The Trojans didn’t throw very much as quarterback Peyton Hart went 2-7 for seven yards and no touchdowns and no interceptions. But Hart rushed for 35 yards on five carries and a touchdown.

Chariton rushed for 75 yards on 51 carries. Sam Primakov led Chariton with 65 yards on 25 carries and one touchdown. At quarterback Smith went 5-10 for 27 yards, no touchdowns and one interception.

Coach Smyser also spoke about how some players on his defense played. “Corran Forst had a good game at nose tackle. Our linebackers still need to improve. From quarter one to quarter four Ryder McGee and Aidan Mundt each got better at stopping the run,” he said.

With seven minutes left in the first period and the score still 0-0, West Marshall had a first and 10 at their own 29. Pope broke loose up the middle for a 42-yard gain down to the Charger 29.

Pope ran down to the 18 for another first down. Caiden Vellinga ran up the middle to the seven to set up first and goal. Pope picked up two yards to the five and on the next play three yards to the two.

On third and goal from the two, Pope ran it in for a touchdown. West Marshall’s two-point conversion pass was knocked down by Wyatt Chipp to keep the score at 6-0 Trojans with 4:07 left in the first period.

After Chariton’s ensuing drive stalled, West Marshall took over at midfield following an Allen-Winston punt with 2:35 left in the first period. A defensive holding penalty on Chariton moved the ball down to the 40.

Pope ran down the left sideline to the Charger 18 for a first down. Mason Smith ran him out of bounds. After short gains by Pope and Vellinga, West Marshall had a third and three at the 11 with 1:05 left in the first period.

Hart kept the ball on a quarterback keeper and went around left end and into the end zone for an 11-yard touchdown. Pope ran the ball in for the two-point conversion to make the score 14-0 West Marshall with 46 seconds left in the first quarter.

In the second quarter, neither team was able to get deep in the other team’s territory or score and the score was still 14-0 West Marshall at halftime.

Being down just two scores to start the second half, Chariton was still in a pretty good position and still in the game. But on a third and seven play from their own 32, Smith threw a pass downfield that West Marshall’s Joey Tollefson stepped in front of and intercepted and returned for a 40-yard touchdown.

Pope ran the ball in for the two-point conversion to make it 22-0 Trojans with 11:01 left in the third period. Instead of still being down two scores, Chariton had three scores to make up against a very good and fast team with a good defense.

With 1:59 left in the third period, Chariton had a first and 10 at the West Marshall 40. Primakov ran for six yards to the 34 and for two more to set up third and two at the 32. Primakov ran up the middle to the 26 for a first down to run out the third quarter with West Marshall still leading 22-0 but Chariton driving and looking for their first score.

Carries of five and four yards by Primakov set up a third and one at the 17 just into the fourth quarter. Primakov got the ball again and ran it to the 10 to set up first and goal.

On the very next play Primakov ran it into the end zone for a touchdown to get Chariton on the board. Wyatt Chipp’s extra point was good to make the score 22-7 West Marshall with 10:53 left in the game.

On their ensuing possession, West Marshall had a third and two at their own 41 with 9:49 left. Pope had a long run downfield to the Charger 15 that was helped by some missed tackles by Chariton.

A four yard gain and an 8-yard run by Pope set up a first and goal at the three yard line. Pope ran it in for a touchdown on the very next play to make the score 28-7 Trojans with 7:54 left. McGee nearly intercepted the two-point conversion attempt pass, which was no good to keep the score 28-7.

Chariton was not able to move the ball on their next possession and West Marshall took over at their own 37 following a punt. On a third and one at their own 46 with 5:46 left, Pope had another long run and the Chargers were called for a 15-yard personal foul facemask penalty to give West Marshall a first and 10 at the Chariton 17.

Two plays later Pope carried the ball down to the four to set up first and goal. Following a West Marshall timeout with 3:57 left, Pope ran the ball in for a touchdown to make it 34-7 Trojans with 3:53 left. Hart threw to Kinnick Christensen for the two-point conversion to make the score 36-7 and put the game out of reach.

Chariton began their next possession at their own 29 but weren’t able to move it past their own 35 and were forced to punt.

After West Marshall took over at their own 48 following a punt, the Trojans were called for a delay of game penalty and holding penalty on two different plays. They also ran the ball a couple of times to run out the clock.