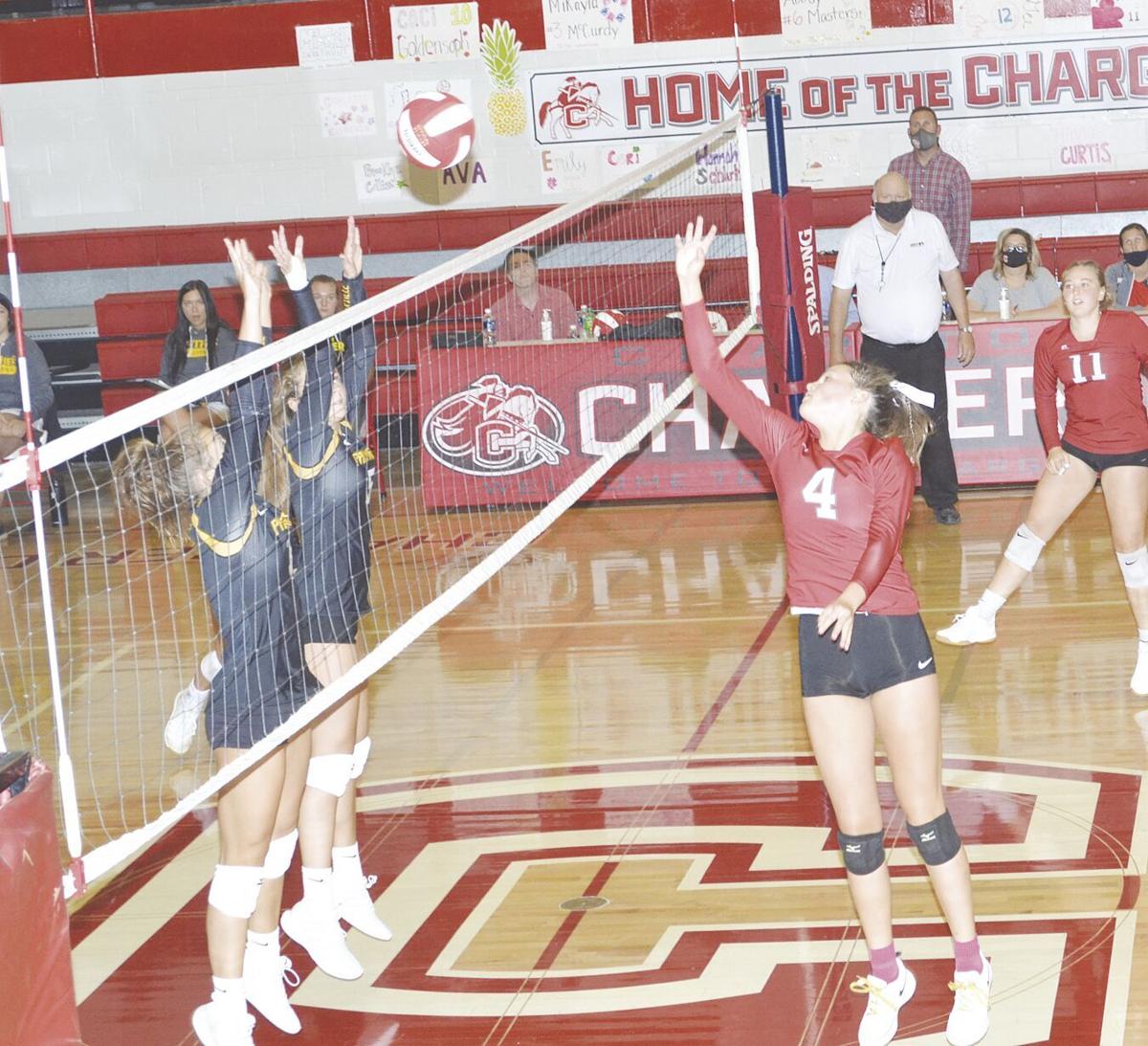 Avery Hall (#4 at right) hits the ball over two Knoxville players during the Varsity volleyball match against Knoxville at CHS Sept. 1. 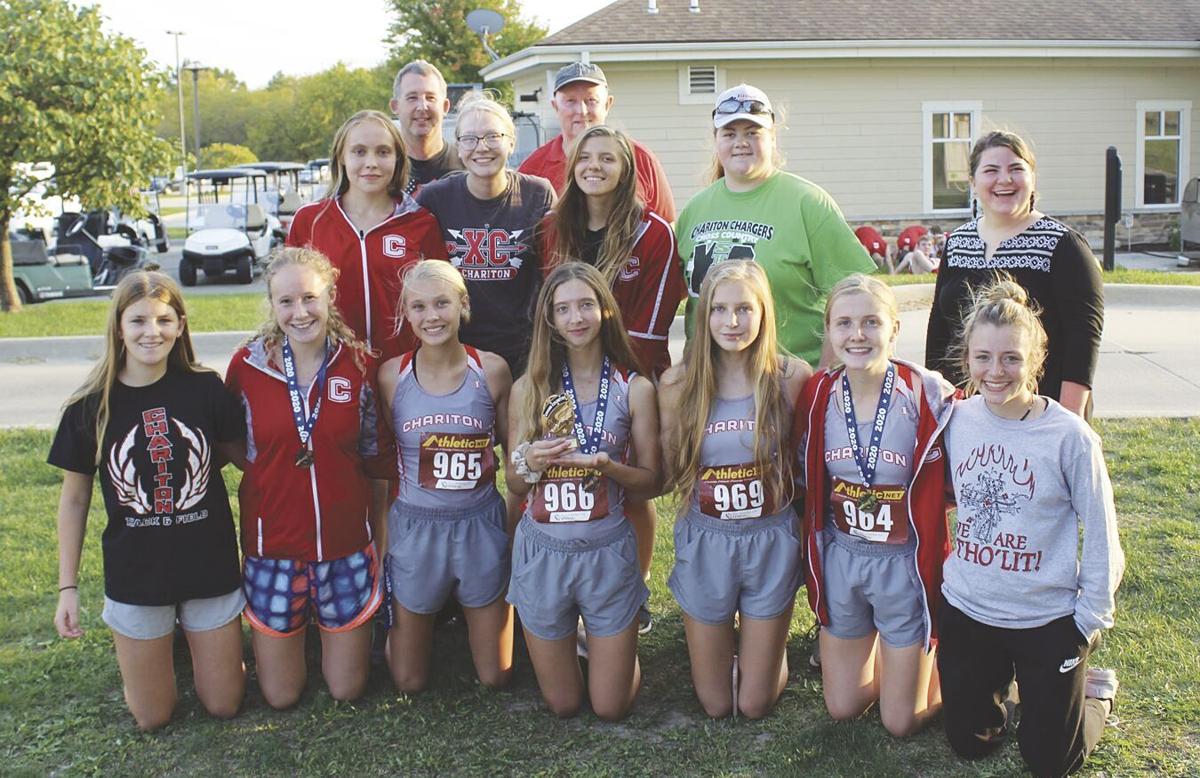 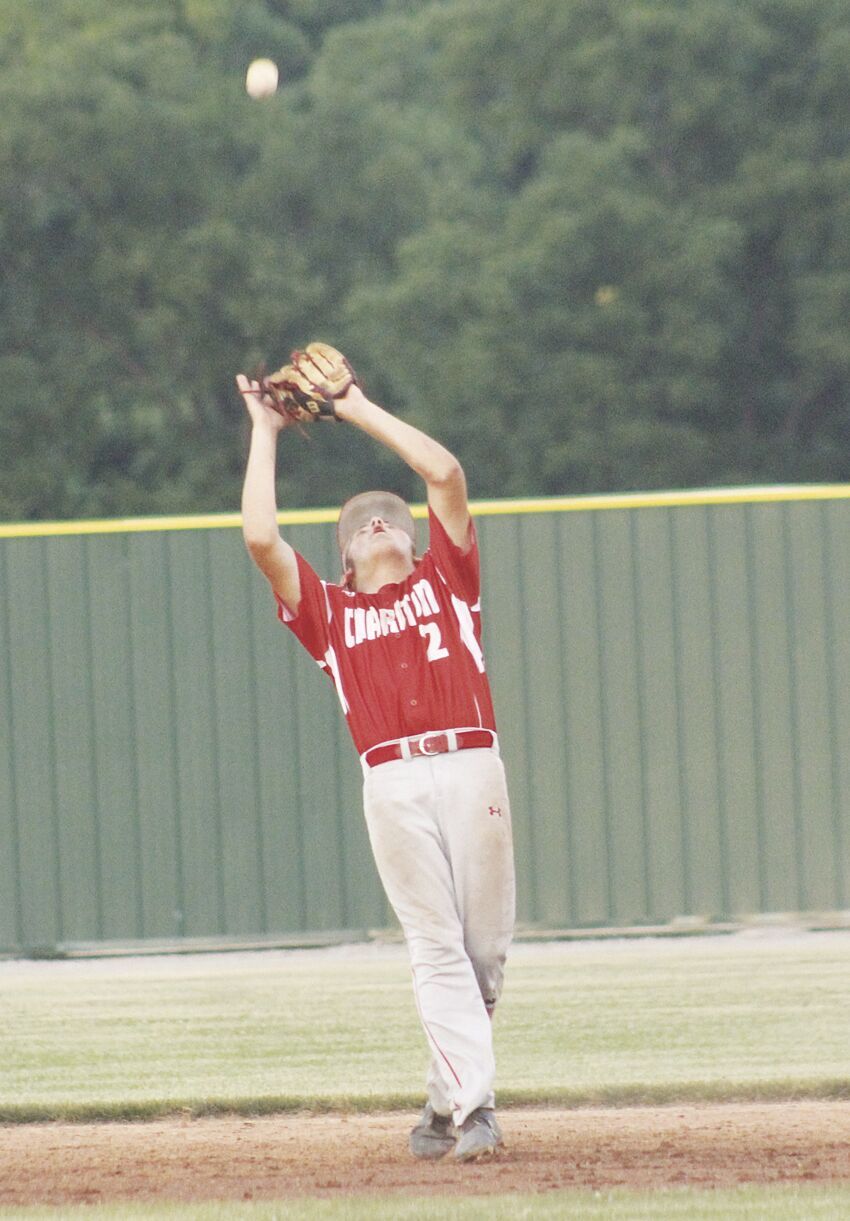 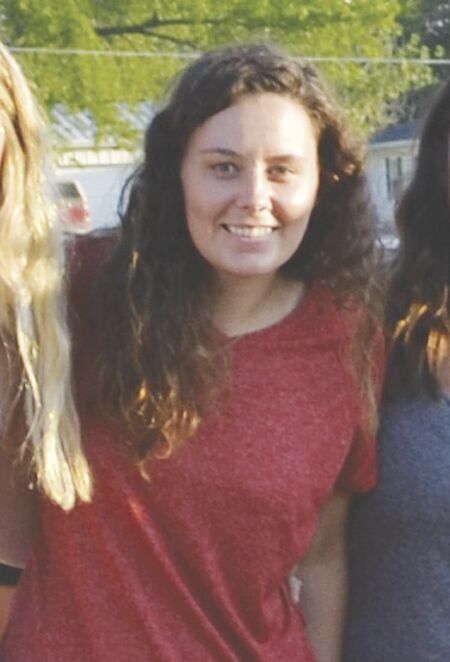 Pictured is Chariton native Kylie Bengtson, who was hired as an assistant softball coach at Buena Vista University in July. 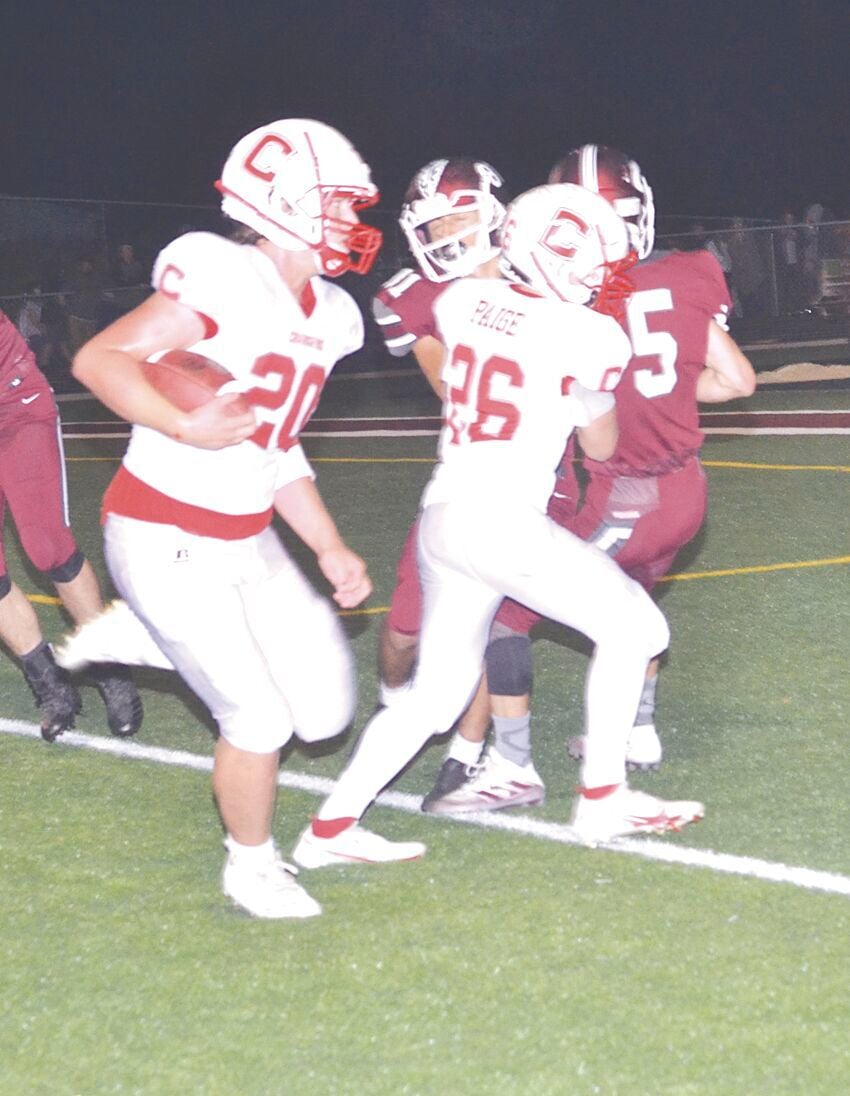 Ryder McGee (#20) runs for a four-yard touchdown during third quarter of the Chariton Varsity football game at Clarke Sept. 18. Blocking in front is #26 Kasyn Paige. 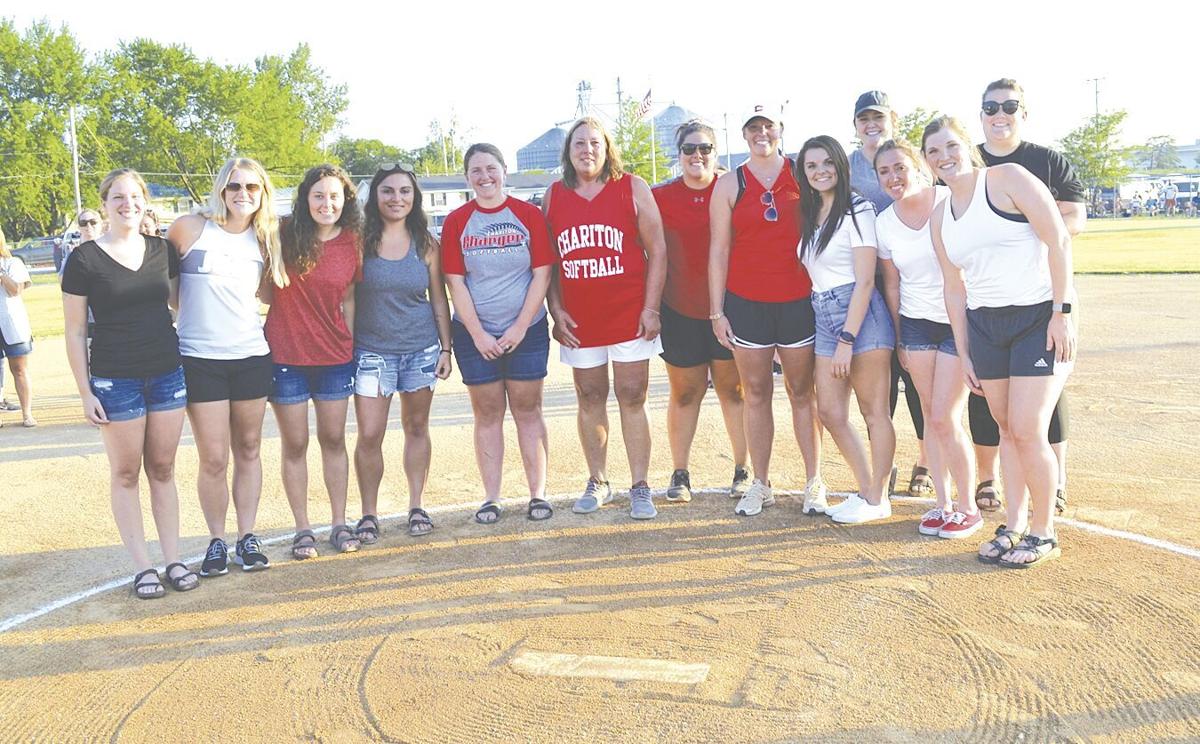 Avery Hall (#4 at right) hits the ball over two Knoxville players during the Varsity volleyball match against Knoxville at CHS Sept. 1.

Pictured is Chariton native Kylie Bengtson, who was hired as an assistant softball coach at Buena Vista University in July.

Ryder McGee (#20) runs for a four-yard touchdown during third quarter of the Chariton Varsity football game at Clarke Sept. 18. Blocking in front is #26 Kasyn Paige.

The main highlight for the third three months in Sports in 2020 may have been the fast start of the Chariton girls cross country team, who began the season by winning the team championship at both the Wayne and Central Decatur meets. In late September, the Lady Chargers were champions of the Moravia Mohawk Invitational. Chariton’s Emerson Fehrer was the overall girls individual champion at the Mohawk Invitational as well. Milanna Primakov placed second overall at the Central Decatur Invitational.

Another main highlight was the honoring of the 2010 Chariton Varsity State softball team, which placed third overall in Class 3A at the 2010 State Tournament. The team’s players along with Head Coach Deb Seuferer and the assistant coaches were honored a Chariton’s home game against Interstate 35 July 7. This team was one of the greatest softball teams in Chariton history and was very dominant during the 2010 season.

Another highlight was the Chariton baseball and softball players that made all-conference during the 2020 season. The Charger boys had five players make all-conference including Quenten Curtis, Ashton Vitale, Dylan Cain, Hunter Koehn and Jackson Curnutte. The CHS Varsity softball team has one player named to all-conference in Savannah Williams.

Pitcher Quenten Curtis tossed a no-hit shutout in the Chariton Varsity Chargers’ 8-0 win at Pleasantville July 1. Chariton pounded out 10 hits and committed no errors defensively in the win.

A great team effort propelled the Chariton JV softball team to a 12-7 win over Central Decatur at Leon. Chariton pounded out 13 hits and had 10 RBIs in the win.

The 2010 Chariton Varsity Softball team that placed third overall in Class 3A at the 2010 State Tournament was honored between games against Interstate 35 at Chariton July 7. The 2010 team went 27-4 overall and went 10-0 in South Central Conference play and climbed to as high as #4 overall in the Class 3A rankings that year.

The Chariton Varsity baseball team came from behind to beat Centerville, 7-3, in nine innings at Centerville July 6. Center fielder Dylan Cain went 2-2 with a triple and a single. Left fielder Will Swarthout went 2-5 with a double, single, one run scored, one RBI and one stolen base.

The Chariton Varsity baseball team’s season came to a close with an 11-8 loss to Albia in their Class 2A Substate 6 first round game at Pella Christian. The loss gave the Varsity Chargers a final season record of 5-6. Chariton finished second in the conference in 2020 behind only Eddyville-Blakesburg-Fremont with a 4-2 record. In the playoff game against Albia, Riley Reece went 4-4 with three runs scored and two RBIs.

The updated 2020 Chariton football schedule was published in the July 28 Leader. Due to changes made by the IHSAA, Homecoming was moved to Oct. 2 against Saydel. The regular season schedule was seven games with District playoff action to begin Friday, Oct. 16.

Photos of the Chariton High School baseball teams’ year end awards banquet were published in the Aug. 4 Leader. Dylan Cain was named the Most Valuable Player for the Varsity team and Kaden Fitzgerald was named the MVP for the JV1 team.

Chariton left fielder Savannah Williams was named to Honorable Mention All-Conference on the 2020 All South Central Conference softball team. Williams had a .900 fielding percentage and committed just three errors on the season.

The annual Fall Sports Preview was published in the Aug. 25 Leader.

Photos of the CHS Volleyball team scrimmage and the CHS football teams’ scrimmage against Central Decatur were published in the Ag. 25 Leader.

Facing a critical offseason, Scott Frost is betting on tailoring rather than tearing down

The Chariton girls cross country team began their season with a bang by winning the Wayne Invitational at Corydon Sept. 3. The CHS girls team took home the championship plaque as a team and had four individual medalists including Milanna Primakov-fourth overall, Emerson Fehrer-fifth, Sailor Anderson-eighth and Haddon Anderson-15th.

Photos of the Chariton Varsity volleyball match vs. Knoxville were published in the Sept. 8 Leader. Chariton gave Knoxville a tough match before falling 3-0.

The Chariton boys cross country team had another excellent meet with a third place finish at the Central Decatur Invitational Sept. 8. Chariton had two individual medal winners in Blane Wallace, who placed 11th overall, and Connor Dixson, who placed 15th.

The Chariton Varsity football team fell to the #1 team in Class 2A, PCM, 60-0 in their District opener at Chariton. Kasyn Paige caught five passes for 22 yards and Preston Lane had three catches for 14 yards. Defensive back Josh Desmond had four solo tackles, one assist and one tackle for loss.

The CHS JV1 volleyball team beat Centerville, 3-0, for their third win of the season to move to 3-0 overall. In serving, Addie McGee went 18-20 with five aces.

The Chariton Varsity volleyball team fell to Centerville, 3-0, on Senior Night in Chariton.

The Chariton Varsity football team fell at Clarke, 35-14. The game was tied 7-7 at halftime but Clarke outscored Chariton 28-7 in the third quarter, which proved to be the difference. Ryder McGee rushed for 83 yards on 12 carries and one touchdown. Linebacker Kaden Fitzgerald had a great game defensively with seven solo tackles, one assist, three tackles for loss and one fumble recovery.

The Chariton Varsity volleyball team got their first win of the season with a 3-0 win over Saydel at Saydel Sept. 22. Tammera Alexander went 12-15 serving with two aces. Avery Hall had 12 kills, three solo blocks and one assist.

The Chariton JV football team gave a good effort in a 26-0 loss at Clarke Sept. 21. The JV Chargers rushed for 110 yards on 26 carries.

The Chariton girls cross country team was the champions of the Moravia Mohawk Invitational Sept. 24. Chariton placed first overall with 29 points. Chariton also had the overall girls individual champion in Emerson Fehrer, who place first overall in 24 minutes even. Milanna Primakov placed third overall in 24:66 and Haddon Anderson was fourth in 25:19.

It was announced in the Sept. 29 Leader that Paige Farrell of Chariton is a member of the Central College women’s tennis team.