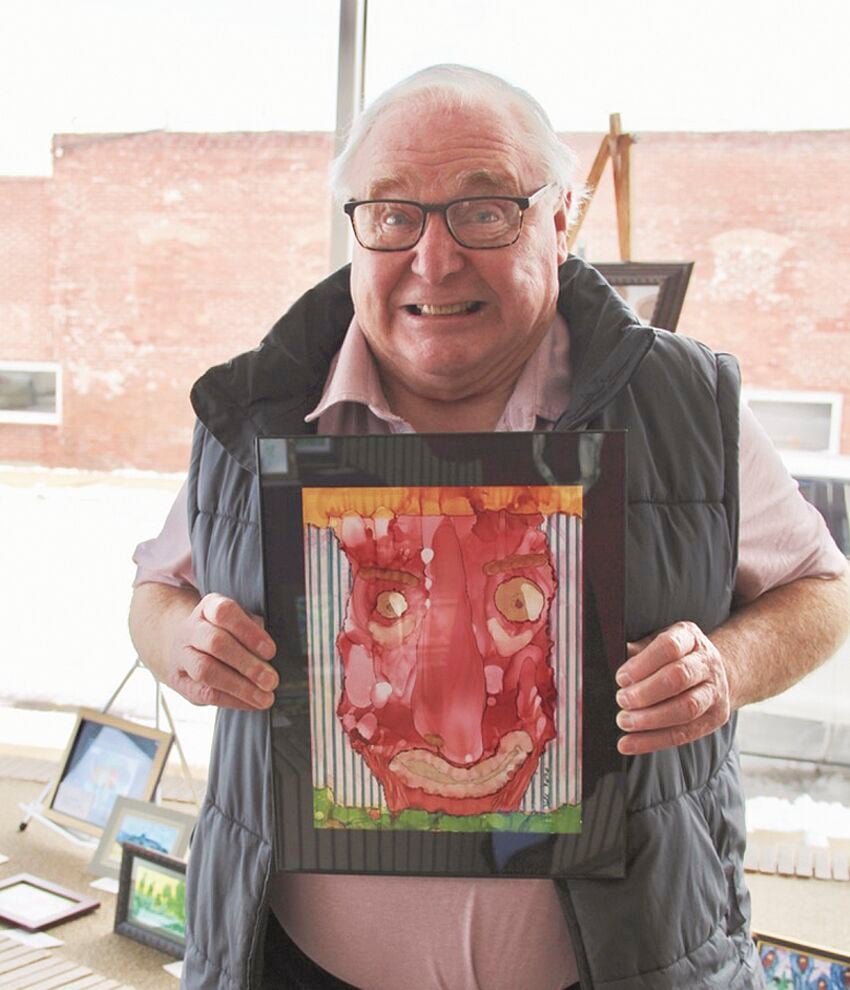 Dale O’Connell, an artist from Lucas, demonstrates the inspiration for this alcohol ink painting with his characteristic good humor! 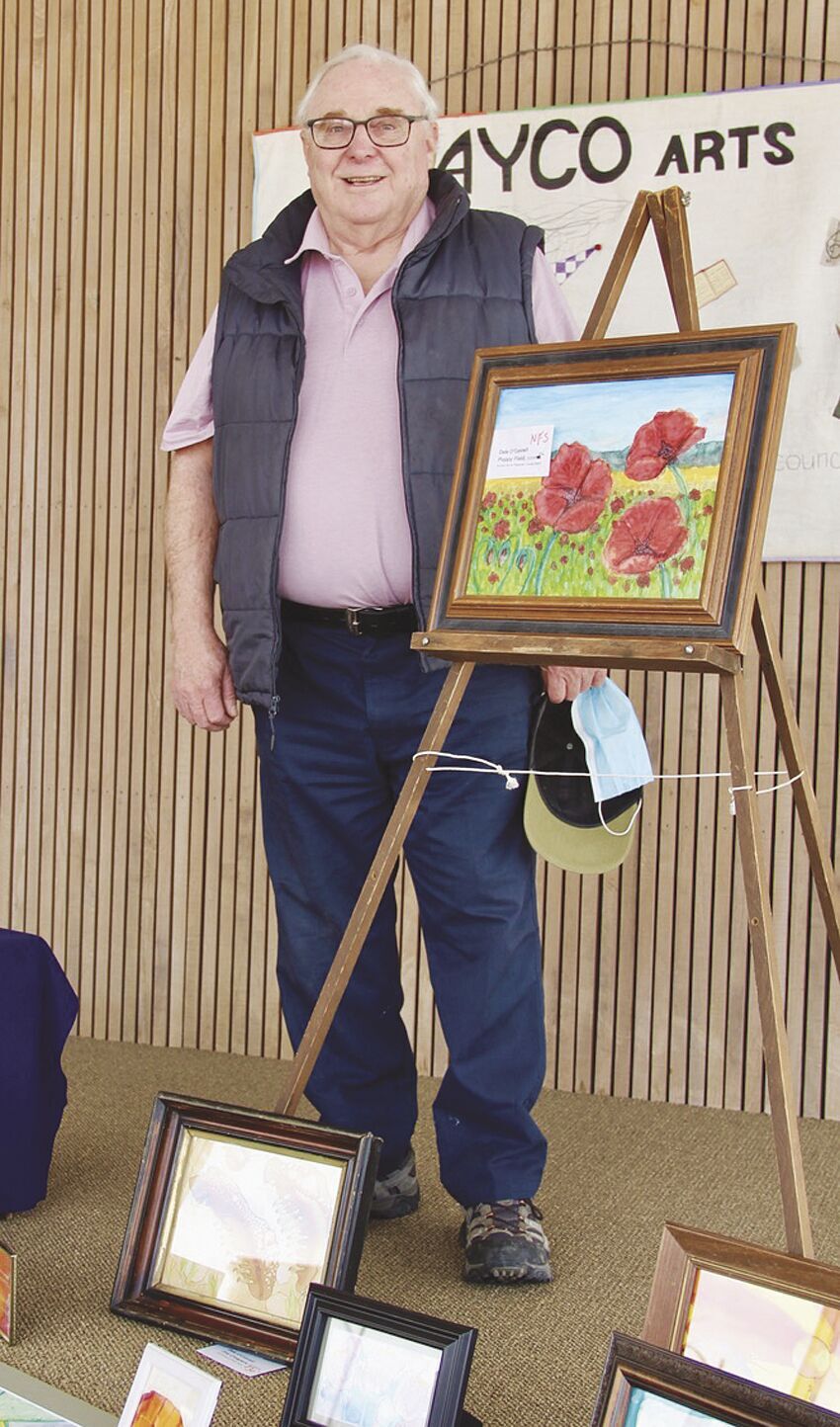 Dale O’Connell (pictured) stands next to one of his wife’s favorite pictures that he has painted with his medium of alcohol ink. His art exhibit “Splash of Color” is on display at the Corydon State Bank through February.

Dale O’Connell, an artist from Lucas, demonstrates the inspiration for this alcohol ink painting with his characteristic good humor!

Dale O’Connell (pictured) stands next to one of his wife’s favorite pictures that he has painted with his medium of alcohol ink. His art exhibit “Splash of Color” is on display at the Corydon State Bank through February.

Growing older doesn’t have to mean getting stuck in a rut of the same routine and habits one has had for the last 20 years or so. After retiring as a Presbyterian minister at the age of 65 and then again at 75, Dale O’Connell realized that he could very possibly live another 30 years and that he needed another occupation. That is when he embarked on a new career as an artist.

When did you first discover that you liked art?

-I was in my late 20’s during the early part of the 1970’s when everything was wild and colorful with the “Dawning of the Age of Aquarius!” I decided to be a part of the art scene. I eventually quit after the 70’s due to the time restraints of being in the ministry.

When did you decide you had a talent for art?

-It was at this same time. I bought a starter set of oils and began painting on a board I found in the basement. I had fun, did well, and realized that I did have imagination, creativity, and talent. After a long hiatus, it wasn’t until 2002 that I picked up my paintbrush again at Christmastime when I was ministering in a very small church and had no money for the kids’ presents. I did some acrylic paintings of manger scenes and gave them those.

What were some of your first attempts at art?

-I did an oil painting that included Adam and Eve, an oak tree, and a rose. Almost 40 years later, I cut between the different pictures and passed them on to my three children who for years had been clamoring for them.

Were you inspired by anyone?

-My first wife Marcia, who passed away in 1987, was an artist and encouraged me from the start. She did some painting and was fabulous with crafts and ceramics.

-My current wife, Linda, is inspiring in that she is so totally supportive of my “new” career. She is constantly appreciating, putting up with, and encouraging my artistic passions.

What mediums have you dabbled in?

What medium are you currently using?

-I am in love with alcohol ink! It ignites my imagination and welcomes my crazy creativity! Its flow is exciting to watch and is unpredictable in its outcome. It colors are vibrant! The inks and supporting supplies are inexpensive. Any clean up or “redo’s” are simple; one just uses a wipe with rubbing alcohol. It requires very little space and is easily portable. It is a fun activity to share with my grandchildren – better than finger painting or watercolors!

What project are you currently working on?

-I am just beginning my 2021 body of work. This year I am focusing on composition – including more than one object in my picture to give it context.

What is a favorite piece of yours and why?

-It is a colored pencil drawing titled “Branden Creek.” That’s a place located on the Dingle Peninsula in Ireland, which is the westernmost part of Europe. My great grandparents came from Ireland, and we visited there in 2016. It is so inspiring! A dreamer’s paradise!

Did anyone mentor you or did you get training elsewhere?

-I’ve never had a mentor. However, after working solely in pencil and having practiced the skills of perspective, shading, proportion, composition, etc.; I was ready to take up the challenges of working with color. In July of 2019 I took a three-hour class in Alcohol Ink led by Jorja Kemp from Ames. I had never heard of such a thing, but it was a local offering scheduled by the Chariton Arts Council and hosted by the Lucas County Historical Society Museum. I decided to give it a try and, oh, wow! I immediately fell in love with the Alcohol Ink! From that one class until December of 2020, I enthusiastically produced over 100 paintings using that medium.

Has your work been published or displayed somewhere?

-I have works on display full time and for sale at Lucas Handmade Treasures (a vendor store in the old bank building in Lucas). I also have several pictures for monthly bidding at Ms. Cellany’s Online Auction House, which is a Facebook group and free to join. For the month of February, my very first art show “Splashes of Color” will be on display at the Corydon State Bank’s lobby thanks to the Wayne County Arts Council and Wayne and Marilyn Jackson.

Do you see yourself doing the same work in the future?

-Absolutely! This is my second career’s life’s work. I began in earnest to become an artist at the age of 77. I will be 80 in May. With good health and God’s blessing, I could possibly live 20 more years and become a truly accomplished artist. I intend to do that!

Thousands of students dropped out of school due to Covid-19. These are the educators trying to track them down.

-Right now I’m totally enamored with using the inks, but I would like to eventually get back to working with oils or acrylics. And, maybe someday I’ll take a class in watercolors to see if I might like that medium.

What other artists do you admire?

-Locally, I admire Susan Baer, Nash Cox, and so many other members of the Chariton Arts Council. I really like the work and music of Adam Bahr.

If you could meet an artist back in history, who would it be?

How long have you lived in Lucas County?

-We’ve lived here for 15 years. I was born in Pittsburgh, Pa., and have also lived in Nebraska, New York, California, Missouri, and Kansas. We now live in Lucas.

What do you appreciate about the art environment here?

-It is so engaging and inviting. I like the art shows (boo Covid!) and the whole performing arts effort promoted by so many leaders and businesses.

What would be one place where you’d like to live or visit that inspires you?

-I’d like to live in Dingle, Ireland in the upstairs of Murphy’s Ice Cream Parlor. Dingle is in the kingdom of Kerry surrounded by mountains and the sea. The milk and cream used in the ice cream comes from the rare indigenous Kerry cow breed. When visiting there, I tried their lavender ice cream and their caramelized brown bread ice cream…to die for!!

What is your studio like if you have one?

What would be your idea of a dream studio?

-My dream would be to have enough space to set up a few sturdy and more permanent easels with room to also display some of my work.

What/where is a favorite art gallery that you’ve visited?

-The Pink Rooster/Garbo Gallery in Ocean Springs, Miss., and the Crystal Bridges Museum of American Art in Bentonville, Ark.

Do you have a website/Facebook page where people can view or purchase your art?

-Not really. That is one of my next steps. I do post my art works piece by piece as I finish them on my Facebook feed.

Dale O’Connell is 79 years old. He and his wife Linda have both been Presbyterian ministers; most recently before retiring – he in Humeston and she in Lucas and Chariton. They are wonderful grandparents taking each grandchild when they turn 10 years old on a trip to the Black Hills of South Dakota to visit places like Mount Rushmore, the Crazy Horse Monument, the Tar Pits and the Corn Palace. They will be taking the last of six trips with 12 different grandchildren (and one great grandchild).

As a 4th generation Irishman with a sense of humor, before taking his trip to Ireland, he was told that if he ever did go to Ireland there would be no need for him to kiss the Blarney Stone!