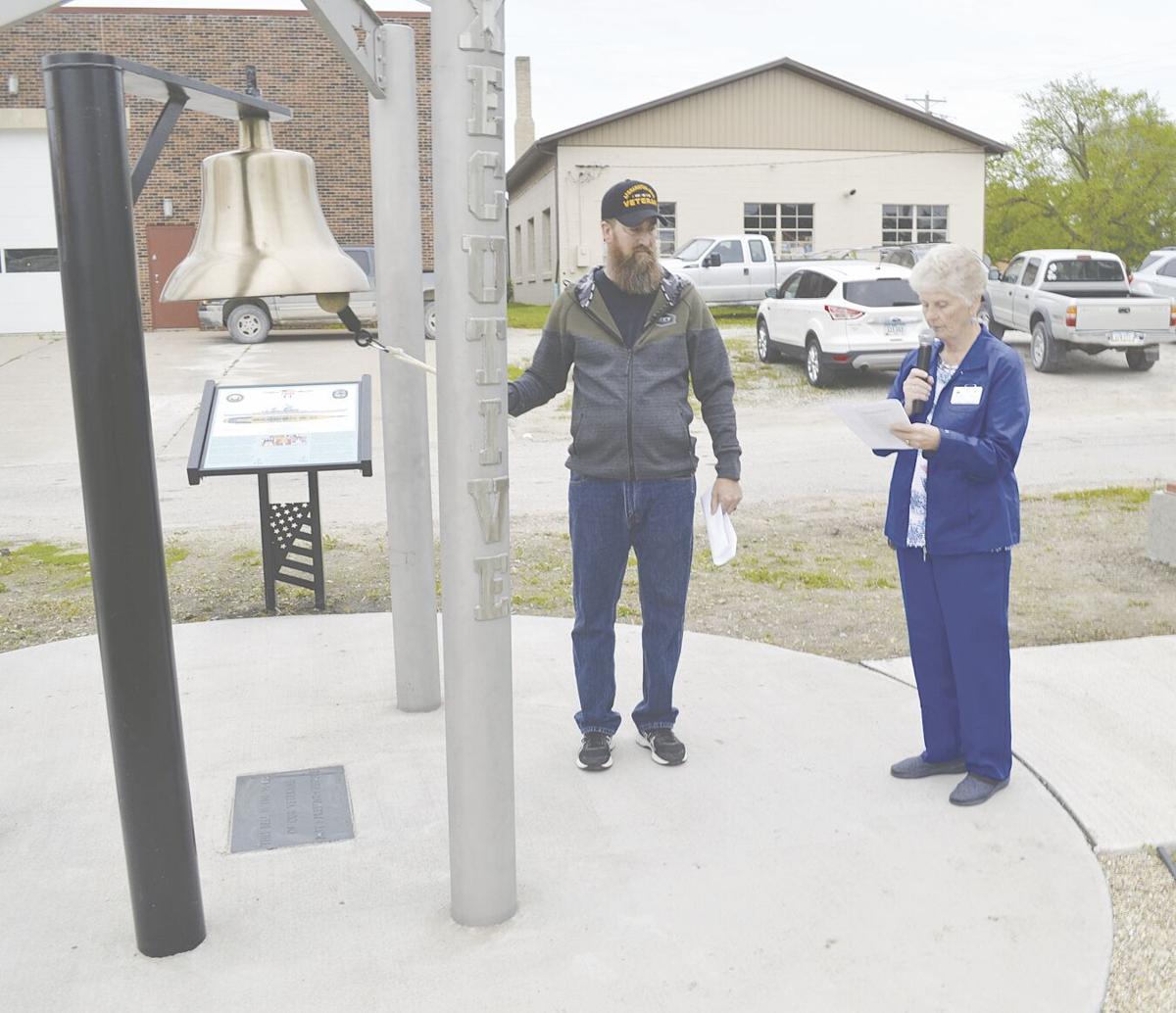 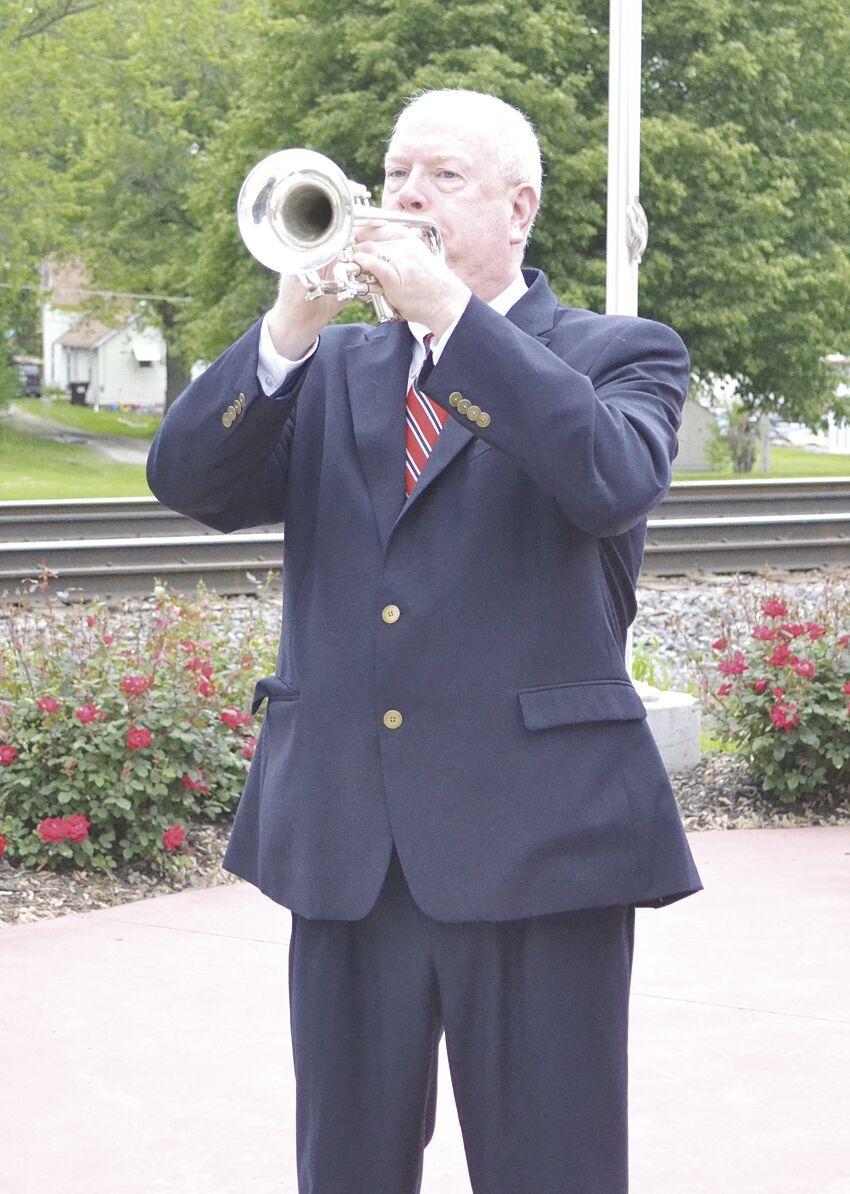 Adam Bahr of Chariton plays Taps on the trumpet to conclude the Memorial Day ceremony. 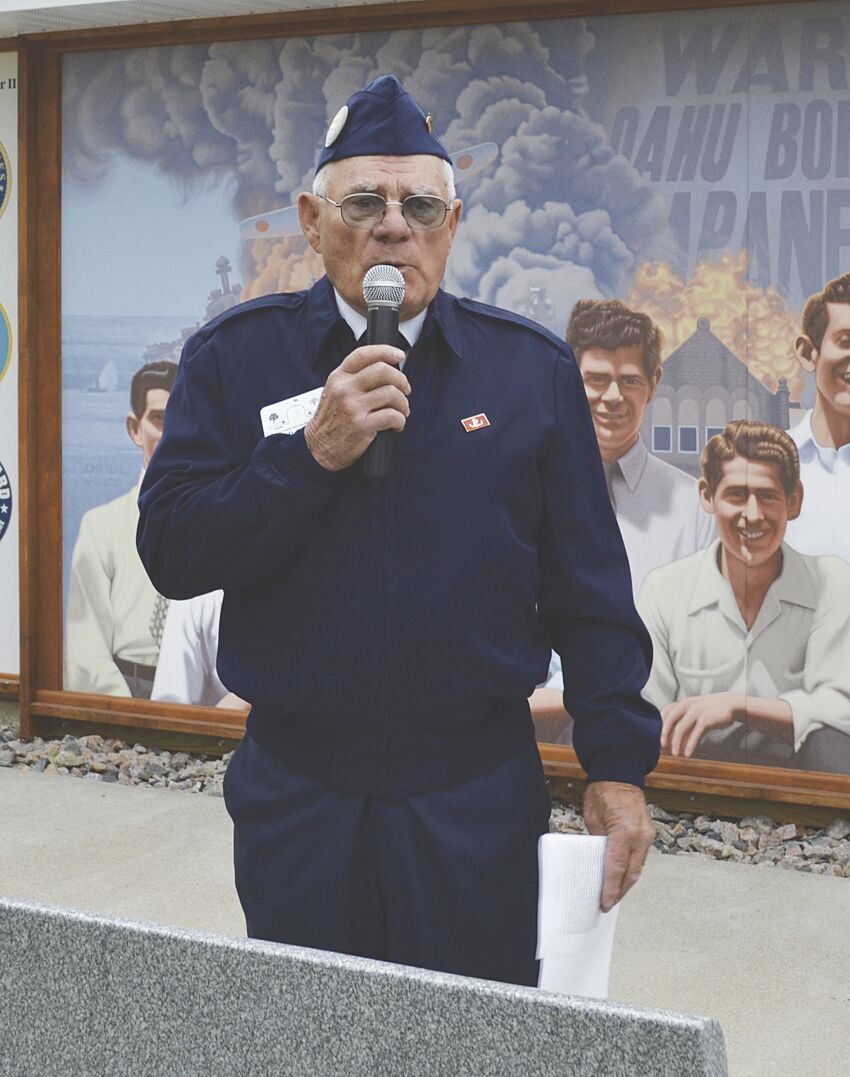 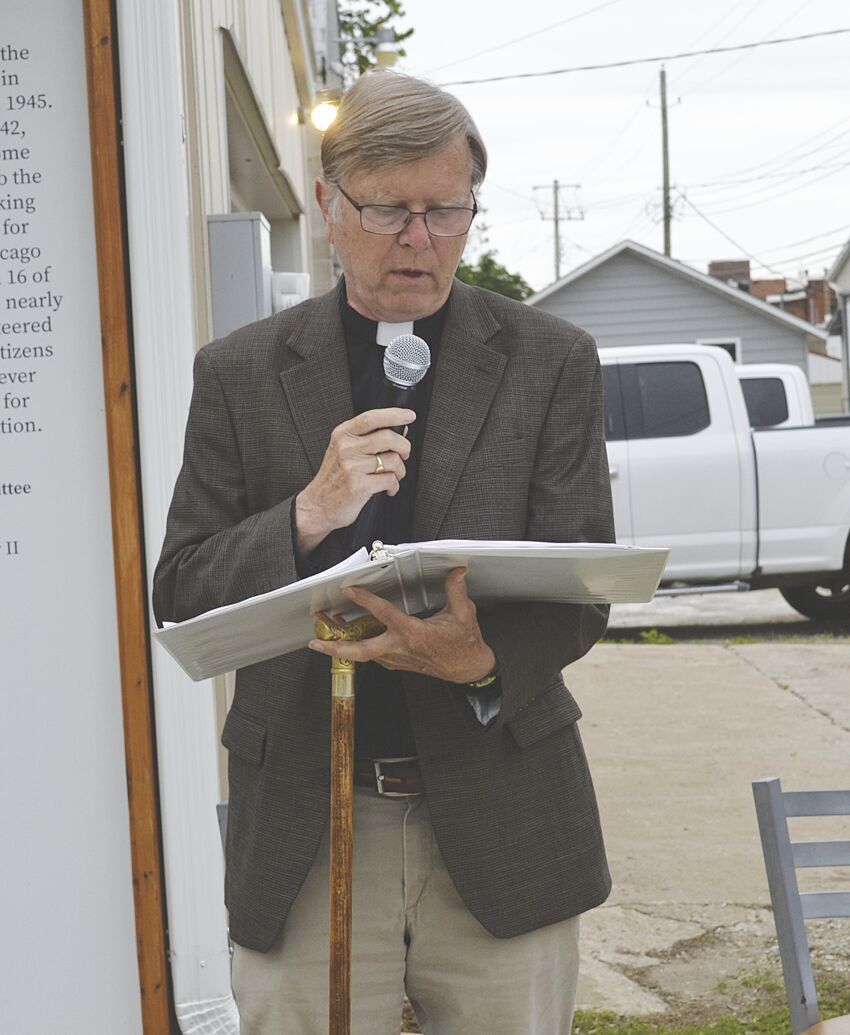 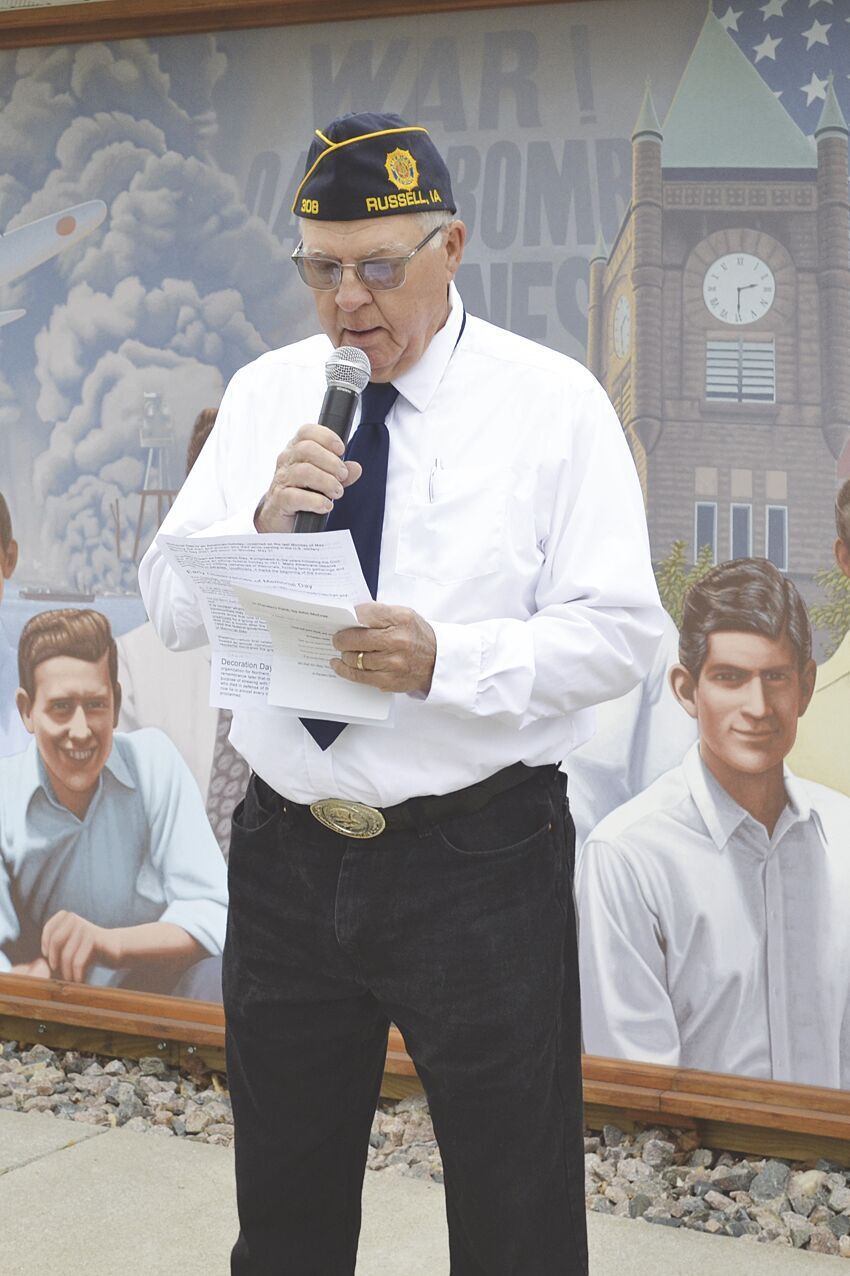 Roger Blunk of the Lucas County Veterans Memorial Park Committee reads about the Memorial Day holiday at the ceremony. 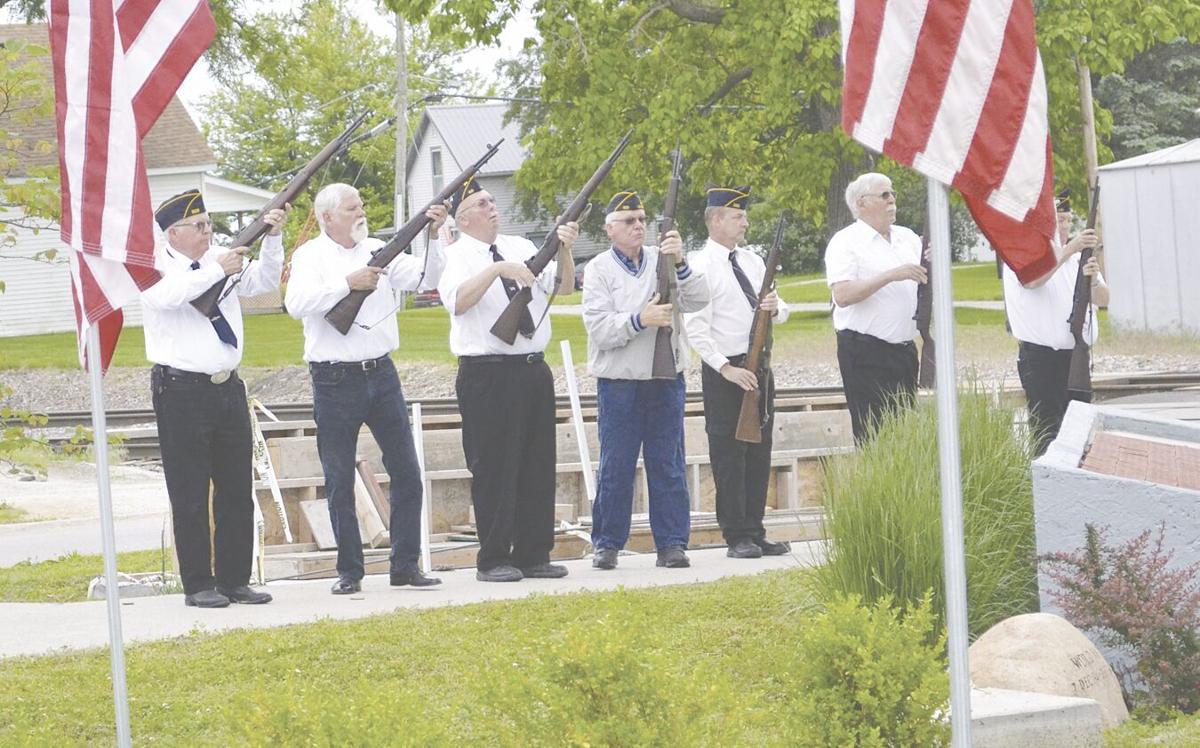 The Lucas County veterans pictured perform the Twenty-One Volley at the Memorial Day ceremony held at the Veterans Memorial Park. The seven rifles were used to each fire three volleys in memory of the fallen. 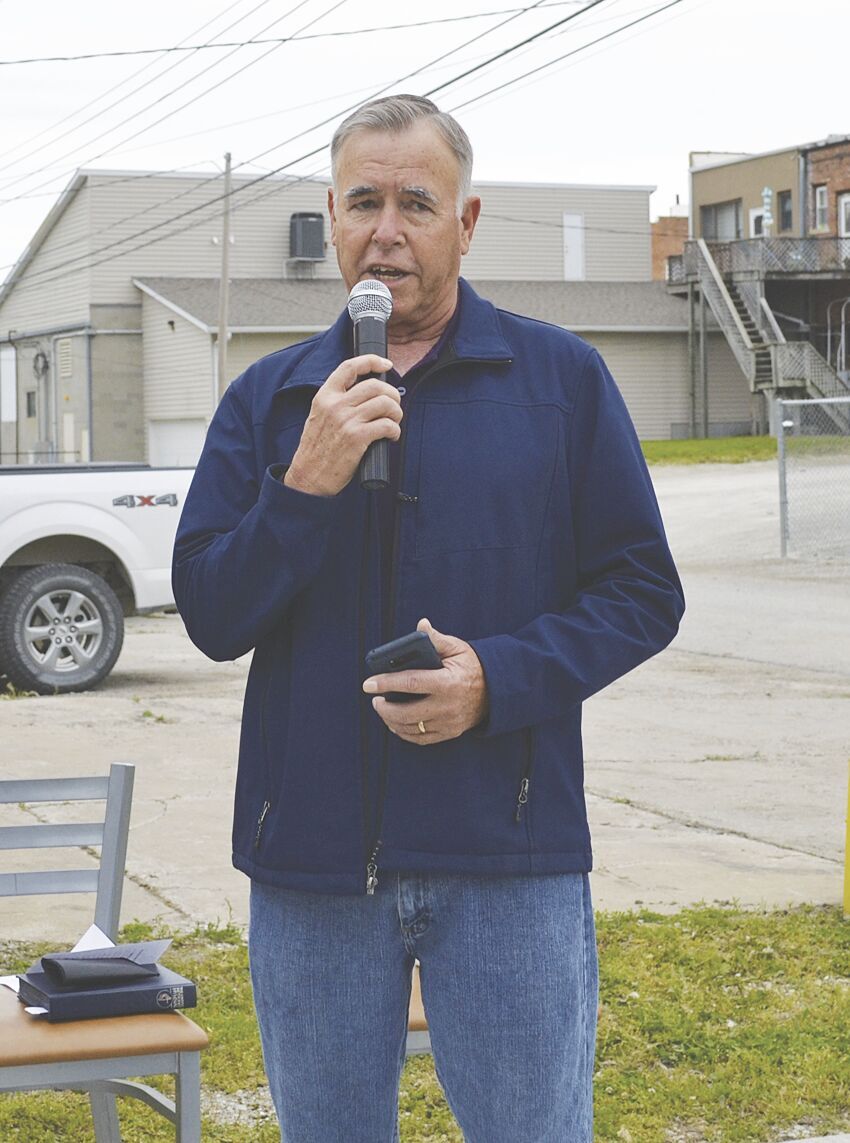 Tony Irving of Chariton sings the National Anthem at the Memorial Day ceremony.

Adam Bahr of Chariton plays Taps on the trumpet to conclude the Memorial Day ceremony.

Roger Blunk of the Lucas County Veterans Memorial Park Committee reads about the Memorial Day holiday at the ceremony.

The Lucas County veterans pictured perform the Twenty-One Volley at the Memorial Day ceremony held at the Veterans Memorial Park. The seven rifles were used to each fire three volleys in memory of the fallen.

Tony Irving of Chariton sings the National Anthem at the Memorial Day ceremony.

A Memorial Day ceremony honoring our beloved and courageous fallen veterans was held at the Lucas County Veterans Memorial Park in Chariton early Monday morning, May 31. A small crowd was on hand for the ceremony, which lasted roughly a half hour. The Chariton and Russell American Legions and the Lucas County Veterans Memorial Park Committee put on the ceremony.

Father Fred Steinbach gave the Memorial Day Invocation prayer. ‘On this Memorial Day, we come before God to remember those who bravely served our great country and, as a result of their service, were called home by our Lord. Father, we ask for Your blessing upon the souls of those good men and women who gave their last breath in defense of our nation, our freedom, and our children’s future. We also ask you to bless everyone gathered here today, and grant us the strength to rise to the challenges of our time and meet them in full faith that You will always be with us. May we glorify You in all that we do, Lord, today and every day. Amen,” Father Steinbach said.

Roger Blunk then read about Memorial Day including the history of it. “On May 5, 1868, General John A. Logan, leader of an organization for Northern Civil War veterans, called for a nationwide day of remembrance later that month. ‘The 30th of May, 1868, is designated for the purpose of strewing with flowers, or otherwise decorating the graves of comrades who died in defense of their country during the late rebellion, and whose bodies now lie in almost every city, village and hamlet churchyard in the land,’ General Logan proclaimed,” Blunk said.

“The date of Decoration Day, as he called it, was chosen because it wasn’t the anniversary of any particular battle. On the first Decoration Day, General James Garfield made a speech at Arlington National Cemetery, and 5,000 participants decorated the graves of the 20,000 Civil War soldiers buried there, Many Northern states held similar commemorative events and reprised the tradition in subsequent years; by 1890 each one had made Decoration Day an official state holiday. Southern states, on the other hand, continued to honor the dead on separate days until after World War I.

“Memorial Day, as Decoration Day gradually came to be known, originally honored only those lost while fighting in the Civil War. But during World War I the United States found itself embroiled in another major conflict, and the holiday evolved to commemorate American military personnel who died in all wars, including World War II, the Vietnam War, The Korean War, and the wars in Iraq and Afghanistan.

“For decades, Memorial Day continued to be observed on May 30, the date General Logan had selected for the first Decoration Day. But in 1966, Congress passed the Uniform Monday Holiday Act, which established Memorial Day as the last Monday in May in order to create a three-day weekend for federal employees. The change went into effect in 1971. The same law also declared Memorial Day as a federal holiday,” Blunk said.

Blunk also spoke some about Memorial Day traditions including where cities and towns across the United States host Memorial Day parades each year, often incorporating military personnel and members of veterans’ organizations. Some of the largest parades take place in Chicago, New York and Washington D.C.

“Americans also observe Memorial Day by visiting cemeteries and memorials. Some people wear a red poppy in remembrance of those fallen in war, which is a tradition that began with a World War I poem. On a less somber note, many people take weekend trips and throw parties and barbecues on the holiday, perhaps because Memorial Day weekend, which is the long weekend comprising the Saturday and Sunday before Memorial Day and Memorial Day itself, unofficially marks the beginning of summer,” Blunk said.

LA sheriff doubles down on why he won't enforce mask mandate

Following the poem, the tolling of the Memorial Park bell was held for each of the 11 wars/conflicts the United States has been involved in since 1775. Terry Thompson of Chariton did the tolling of the bell in which the name of each conflict was read and then the bell was tolled once for each war/conflict.

After the tolling of the bell, Tony Irving then sang “The Battle Hymn of the Republic.”

Memorial Park Committee Chairman Earl Comstock then told about the firing of the three-rifle volley. “The three rifle volley consists of no less than three and no more than seven rifles firing three volleys in memory of the fallen. The original history comes from the Roman era that at the end of the day of battle when the field of battle was cleared, if the soldier removing the slain soldier knew the name of the soldier, then they would call his name three times into the night as a form of remembering their sacrifice. After the firing of the volleys in a funeral, three spent cartridges are collected and placed in the folded flag, prior to the presentation to the next of Kin; the three cartridges signify ‘Duty, Honor and Sacrifice,” Comstock said.

The Twenty-One Volley was then performed by some of Lucas County’s veterans.

Father Fred Steinbach then read the Benediction. “Dear Lord. You have blessed this great nation with brave men and women who paid the ultimate sacrifice for our freedom. As we bring this ceremony to a close let us never forget what they have done. Help us to make Memorial Day every day in our minds and hearts. May You watch over and embrace those who have fallen and may they always be in our memory. Let freedom ring. Amen,” Father Steinbach said.

Adam Bahr of Chariton played Taps on the trumpet to conclude the ceremony. Following the playing of Taps, the Memorial Park’s bell remained unlocked for anyone who wanted to toll the bell for a veteran.