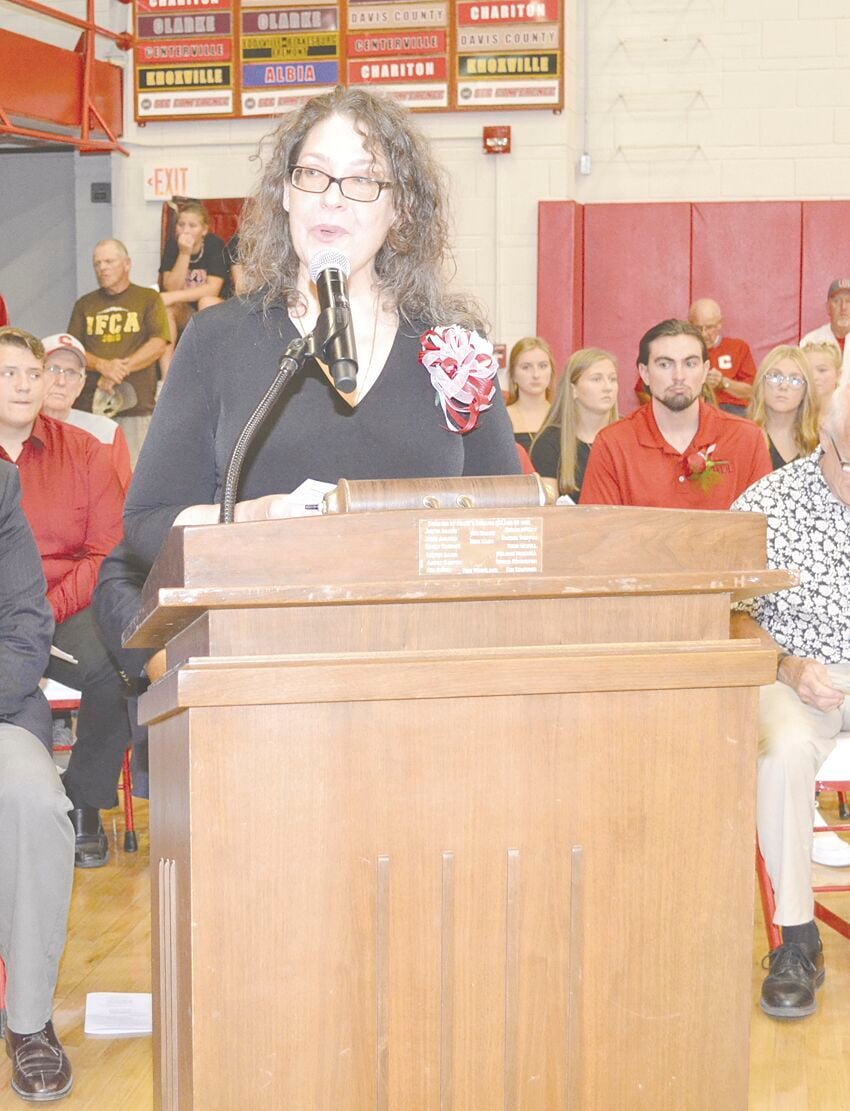 CHS 2021 Hall of Pride Inductee Angela Altenhofen speaks to the audience following her induction at the Homecoming assembly at CHS this past Friday. 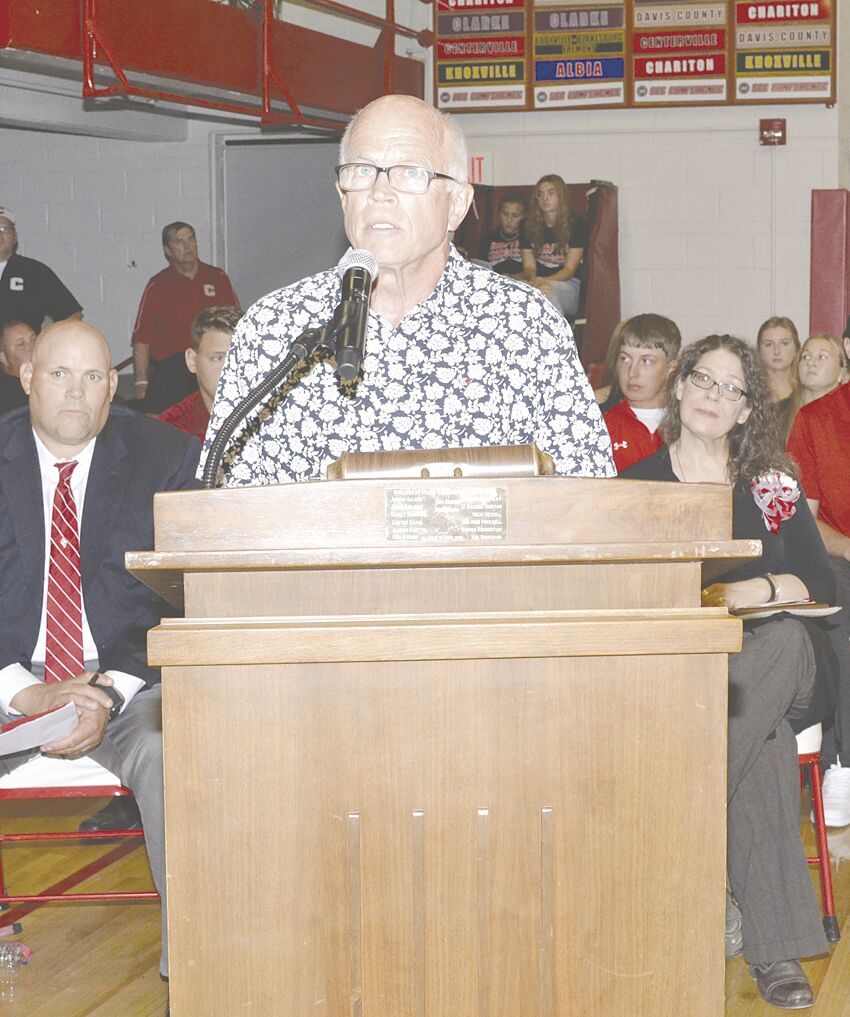 Corky Stuart, the son of the late William C. Stuart, the second 2021 CHS Hall of Pride inductee, speaks on behalf of his dad at the Homecoming assembly on Friday.

CHS 2021 Hall of Pride Inductee Angela Altenhofen speaks to the audience following her induction at the Homecoming assembly at CHS this past Friday.

Corky Stuart, the son of the late William C. Stuart, the second 2021 CHS Hall of Pride inductee, speaks on behalf of his dad at the Homecoming assembly on Friday.

Two former Chariton High School graduates were inducted into the Hall of Pride at the Homecoming assembly at CHS this past Friday afternoon.

The new Hall of Pride inductees were Angela Altenhofen, a 1985 CHS graduate, and the late William C. Stuart, a 1937 CHS graduate. Stuart’s son, Corky, accepted the award on William’s behalf and spoke about his dad at the assembly as well.

Kevin Graves of the Chariton Alumni Association spoke about the Hall of Pride inductees at the assembly Friday before their induction.

Moving to Florence, Italy, Altenhofen served as the Assistant Director and Student Advisor for an international art academy. When she returned to the states, Altenhofen was based out of Chicago and exhibited and sold her artwork both nationally and internationally, including at galleries and museums in Tel Aviv, Vienna, Florence, Chicago, and New York.

Altenhofen’s last gig in Chicago was working as a published illustrator for the Oriental Institute at the University of Chicago, drawing artifacts from archaeological sites in Egypt, Iran, Iraq, Syria and Israel.

Altenhofen considers herself and interactive sculptor. Soon after she earned her Master’s from the Art Institute in Chicago, she was diagnosed with a degenerative eye condition. She was told back then that within a couple of years she could be blind.

Altenhofen started asking herself, “What does it mean for a visual artist to lose her sight?” Her answer was to teach herself Braille and she started incorporating it into her artwork.

Sometimes, when her sight dims more than usual, she tries to channel her fears into her artwork. She has said, “You have to do that in life….You have to transform the scary into something magical.”

Altenhofen returned to Iowa in 2015, and soon after, was selected to have an exhibit placed in the Governor’s office. She was honored to be selected to be a 2019-2020 Iowa Artist Fellow, which is awarded to those who demonstrate exceptional creativity and the capacity to contribute to the innovation and elevation of arts in Iowa.

When Altenhofen isn’t creating, or recovering from a series of eye surgeries, you can find her helping, (and patrolling), at the Chariton Free Public Library. She was just awarded a grant from the New York Foundation for the Arts and her next solo exhibit opens this January at Grandview University in Des Moines.

The second Hall of Pride inductee, William C. Stuart, graduated from Chariton High School in 1937 and “Chariton Junior College” in 1938, and then headed to the University of Iowa.

Stuart became roommates and friends with a guy named Nile Kinnick, if you happen to have heard of Kinnick Stadium.

Stuart received his law degree with high distinction in 1942. He enlisted and became a pilot in the Naval Air Corps until he returned to Chariton in 1946 to become the fourth generation in his family to practice law in what was then the National Bank and Trust Building.

After 16 years in private practice, Stuart served eight years as a State Senator, nine years as a Justice of the Iowa Supreme Court and, after being nominated by the President, was confirmed by the United States Senate to be a U.S. District Judge.

Stuart served in that capacity for 15 years, his last eight as Chief District Judge.

“He would have been pleased this past weekend as he held Iowa season football tickets since WWII. Those had to be pretty good seats,” Graves said.

Throughout all of this, Stuart was a member of many local organizations and helped start the Chariton Historic Preservation Commission.

Before he passed away in 2010, Stuart celebrated 63 years of marriage to his wife Elgin. They had four children, all of whom were graduates of CHS including: Valerie, Melanie, Cullen, and Corky.