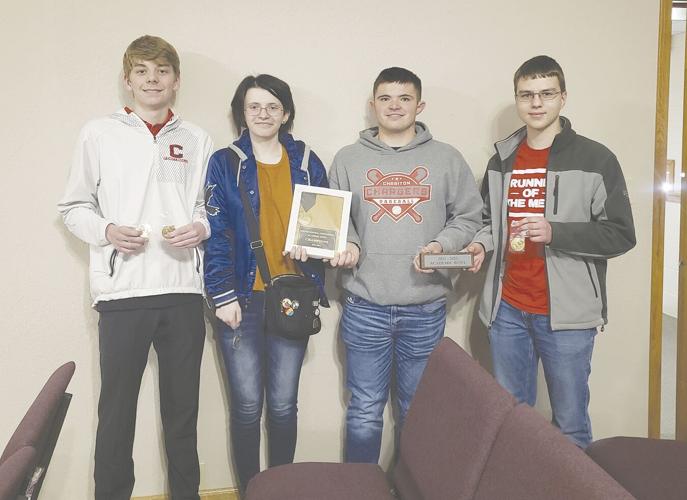 Pictured are the members of the Chariton I Academic Team that were the overall champions of the 2021-2022 South Central Conference Academic Meet held in Eddyville Friday, March 25. They are from left: Mitch Swarthout, Mallory Logan, Max Aulwes and Ethan Werts. 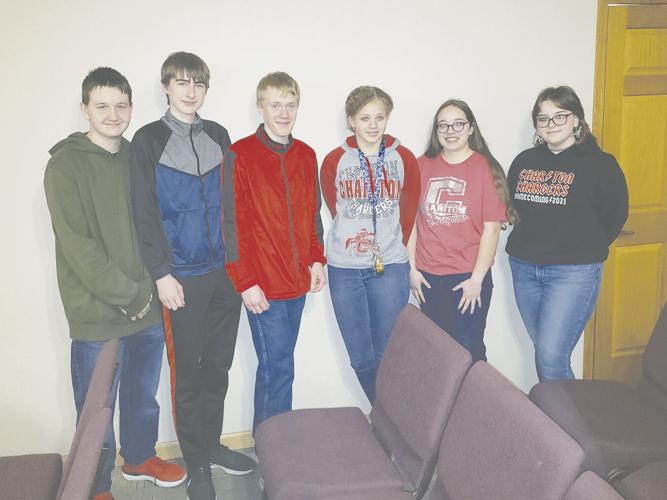 Pictured are the members of the Chariton II team that tied for seventh place overall at the 2021-2022 SCC Academic Meet. They are from left: Aiden Burbridge, Connor Dixson, Bradley Hobbs, Jada Kelley-James, Mariah D’Attilio and Elaine Prose. 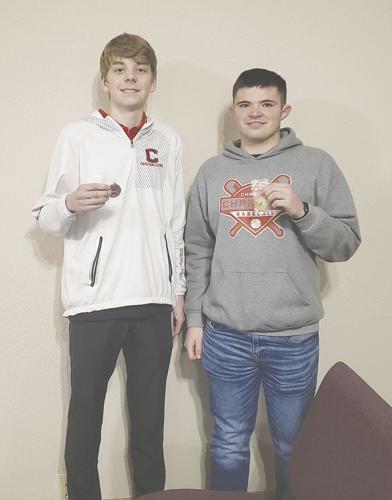 Pictured are Mitch Swarthout (left) and Max Aulwes of Chariton I, who were both named to the SCC Academic All-Conference team.

Pictured are the members of the Chariton I Academic Team that were the overall champions of the 2021-2022 South Central Conference Academic Meet held in Eddyville Friday, March 25. They are from left: Mitch Swarthout, Mallory Logan, Max Aulwes and Ethan Werts.

Pictured are the members of the Chariton II team that tied for seventh place overall at the 2021-2022 SCC Academic Meet. They are from left: Aiden Burbridge, Connor Dixson, Bradley Hobbs, Jada Kelley-James, Mariah D’Attilio and Elaine Prose.

Pictured are Mitch Swarthout (left) and Max Aulwes of Chariton I, who were both named to the SCC Academic All-Conference team.

The Chariton I Academic Team reigned supreme as the overall champions of the 2021-2022 South Central Conference Academic Meet held at Eddyville Disciples of Christ Church in Eddyville Friday, March 25.

Chariton defeated Albia I in the championship match to capture the SCC Academic team Champions title. The members of the Chariton I team were: Max Aulwes, Mallory Logan, Mitch Swarthout and Ethan Werts.

There were 10 members chosen for the SCC Academic All-Conference team which included the leading scorers from each school and four at-large members.

Aulwes and Swarthout were both selected to the SCC All-Conference Academic Team. Swarthout was the leading scorer for Chariton I with 270 points while Aulwes scored 170 points on the day.

There were 12 teams competing in the meet including two from each conference school except Centerville, which was not there.

The tournament consisted of five matches of pool play in the morning. Then in the afternoon the top eight teams advanced to a single elimination bracket.

Chariton I went 4-1 in morning pool play and they were the top seed in the bracket. Chariton II finished the morning pool play with a 2-3 record and was tied for seventh place. But they lost by five points to the Knoxville Gold team to be the eighth team in the afternoon single elimination bracket.

In the first match of the day, Chariton I lost to Eddyville-Blakesburg-Fremont (EBF) Black by a score of 175-145. Chariton led at halftime by a score of 90-74 and was tied going into the last two questions of the match, but EBF Black scored 40 points on the last two questions to earn the victory. Swarthout led the way for the Chargers with 30 points.

In round two Chariton I defeated Chariton II by a score of 155 to 100. Aulwes and Werts each scored 20 points. Logan and Swarthout added 10 points each.

Chariton I met Albia I in the third match of the day. Chariton I jumped out to an early lead and was up 110 to 60 at halftime. Chariton kept their momentum and won the match by a score of 205-115. Swarthout was dominant in this match by scoring 50 points. This would not be the last time Chariton I faced Albia I, as it would be a rematch in the championship match later in the day.

In round four Chariton I defeated Clarke Maroon by a score of 155 to 95. Logan and Swarthout each scored 20 points to lead the Chargers to the victory.

In the final match of pool play Chariton I faced Davis County II and won by a score of 235 to 100. The match was very close at halftime with the Chargers holding a slim lead of 90 to 75. Chariton got the first two questions of the second half and opened up a commanding lead that they would not surrender. Aulwes and Swarthout each scored 40 points to lead the Chargers to the victory.

With a perfect 4-1 record and the most points scored in pool play Chariton I earned the top seed in the eight team single elimination bracket.

Protect Your Hearing This July 4th

In the quarterfinal match Chariton I opened up a very close match at half to win 185 to 85 over Knoxville Gold. Swarthout scored 30 points to lead the Chargers in scoring. Aulwes and Logan each added 20 points.

In the championship match Chariton I defeated Albia I by a score of 190 to 145. Aulwes answered three questions in the first half to give Chariton I a commanding 110 to 55 lead at half.

Albia I responded by answering three questions early in the second half to take a 130-115 lead. Chariton I would not be denied and answered three questions in a row, all by different students to win the SCC Championship by a score of 190 to 145. All four team members answered questions but Aulwes led the team with 30 points.

“Our students competed well today and I am proud that Chariton I was able to bring the SCC Championship back to Chariton. It was a great accomplishment and we hope to have a chance to make it two in a row next year. Chariton I lost their first match of the day, but did not let that lost set the tone for the whole day. Champions respond by fighting back and focusing in on the goal at hand,” Chariton Academic Team Coach Tim Curnutte said.

“I really believe the difference in the afternoon matches was our ability to work as a team. All of our team members have been to numerous matches this year and in the past few years which gave us a lot of match experience. Max Aulwes was our captain for most of the day and provided great Senior leadership today and we will miss his ability to lead the team next year. I am sure that our other team members will capitalize on their opportunities to take on a leadership role in 2022-2023.”

Chariton II lost their first round match to EBF Gold by a score of 180-75 Chariton II started super slow and could never recover. Burbridge was the top scorer for Chariton in this match with 30 points. EBF Gold would go on to become the number two seed after the morning rounds.

In round three Chariton II earned their first victory by defeating Albia II by a score of 140 to 110. Chariton had a small lead of 85 to 75 at halftime and had a strong second half to finish off the match. Prose had a strong match for the Chargers scoring 30 points and Kelley-James, D’Attilio, and Burbridge each added 10 points towards the victory.

In the fourth match Chariton II defeated Clarke White by a score of 170 to 60. Chariton continued their momentum from the last match and opened up a 90 to 10 lead at halftime. Burbridge scored 30 points while Prose and D’Attilio each chipped in 20 points.

With a 2-2 record, Chariton II needed a victory to assure a position in the eight-team single elimination tournament. Chariton II faced EBF Black and played a great match but fell to EBF Black by the score of 210 to 160. Chariton II fell behind in the first half and could never catch up. Burbridge led the team in scoring with 40 points

Chariton II finished pool play with a record of 2-3. Chariton II tied for 7th place but lost the tiebreaker to Knoxville Gold by five points and therefore was in ninth place for the morning rounds.

“Chariton II had a good day and was one question away from making the afternoon rounds. Chariton II excelled in the math questions and all three of their losses were to the teams that finished pool play as the top three seeds. All of the Chariton II team members will be returning next year, so they have something to look forward to in the future,” Coach Curnutte said.