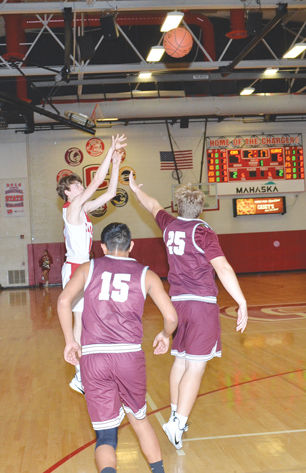 Carson Rector shoots a three-point shot over a Clarke defender in the first quarter of Tuesday night’s game. 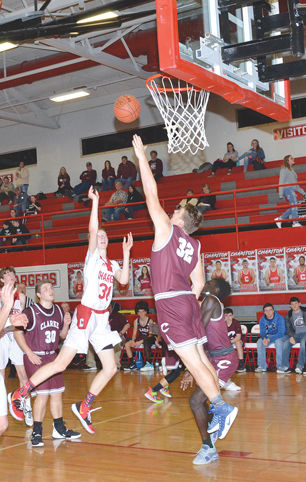 Lance Wallace (#30) shoots over a Clarke defender in the lane on Tuesday night.

Carson Rector shoots a three-point shot over a Clarke defender in the first quarter of Tuesday night’s game.

Lance Wallace (#30) shoots over a Clarke defender in the lane on Tuesday night.

Lance Wallace went 5-7 from inside the arc and 3-3 from the line to finish with 13 points, seven rebounds, two assists and one steal. Jackson Curnutte had 11 points, three rebounds, five assists and four steals.

“I was really proud of our effort tonight, especially in the second half. We came out pretty flat and their zone defense put us to sleep a little bit. Hats off to Clarke for shutting us down early and forcing us into their pace. We responded well after halftime and started forcing the issue and pushing the pace. We had a balanced scoring effort with four guys in double figures and this was a total team effort,” Chariton Head Coach Brett Spiker said.

Recruiting Ticker, Jan. 21: Another busy junior day ahead for Huskers

The first quarter and first half was very low scoring with Chariton leading 12-6 after one period. Chariton led 14-12 with 1:31 left until halftime. Swarthout hit a couple of lay ups after that to put Chariton up 18-12. Clarke hit a basket in the final minute to cut the lead to 18-14 at halftime.

With a faster pace, Chariton began scoring more and had more points in the third period, 19, than they had in the whole first half. They outscored Clarke 19-14 in the third period to lead 37-28 heading into the final period. The Chargers kept up the pace and kept scoring in the fourth pouring in 20 points to 14 for Clarke to put the game away.

Read the January 16, 2020 edition of the Chariton Herald-Patriot for the rest of the story.