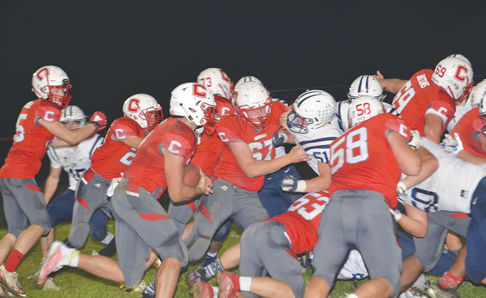 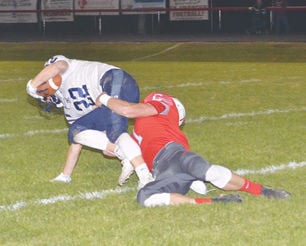 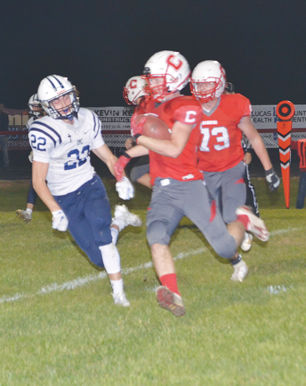 Payton Lavender runs for a seven-yard gain late in the first quarter on Friday night.

Payton Lavender runs for a seven-yard gain late in the first quarter on Friday night.

“This was as big of a win as I’ve had since I’ve been here. Beating the #5 ranked team was huge. I thought defensively it was the best game we’ve played all year. They were averaging over 40 points a game and we held them to just 13. They had one big play over the top of us early and then we held them to just two field goals. We also created turnovers defensively. After the one big play, the rest of the time we tackled well and kept the ball in front of us,” Chariton Head Coach Curt Smyser said. “Our line play was outstanding all night. We just completely dominated the offensive line of scrimmage rushing for 415 yards. Dylan ran at a higher level tonight and both our offensive line and tight ends blocked real well,” Coach Smyser said.

Chariton won for the second straight week without having to complete a pass. They only attempted two passes, both incompletions. Chariton forced two turnovers and they had just one turnover, a fumble lost. They held the Lions to 72 yards rushing and had two sacks and six tackles for loss on the night.

With the huge win, Chariton moved to 4-4 overall, but they’re still unlikely to make the playoffs this season. Three teams in their District were ahead of them in the latest RPI rankings and Coach Smyser said he didn’t think a 5-4 team would make the playoffs.

Chariton’s last game of the season is at Clarke this Friday night at 7:30 p.m.

Read the October 22, 2019 edition of the Chariton Leader for the rest of the story.