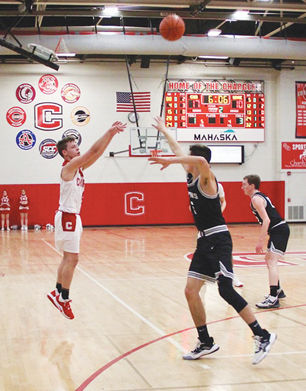 Senior AJ Price (left) shoots a three-pointer over a Wayne player from the wing on Senior Night. (Sharon Wilhite photo) 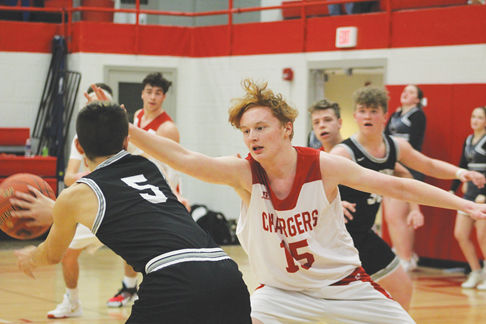 Senior AJ Price (left) shoots a three-pointer over a Wayne player from the wing on Senior Night. (Sharon Wilhite photo)

The Chariton Varsity boys basketball team played well from start to finish in a 50-34 win over Wayne on Senior Night at Chariton this past Thursday night. The win was the fifth straight for the CHS Varsity boys, who improved to 10-8 overall.

“We had an outstanding night in the Charger Dome tonight. It was a great win from the girls to start the night off right. Then the award presentation for Bill Howes of the Chariton Newspapers was a special moment that I was glad we could all be a part of. Senior nights are always a little tough on coaches-it reminds us of all the leadership, maturity, and talent that we will soon have to say goodbye to. When you have a varsity team with 10 seniors on it, this is especially impactful. I couldn’t be more proud of each and every one of them. It’s unfortunate that I’m only able to coach them for one season, but I’m truly grateful for how hard they worked and all the great times we had and will continue to have this season,” Chariton Head Coach Brett Spiker said.

Chariton started off well and led 13-6 after one period. The Chargers kept up their fast breaking offense and tough defense in the second period to push their lead to 26-14 at halftime.

Read the February 22, 2020 edition of the Chariton Leader for the rest of the story.